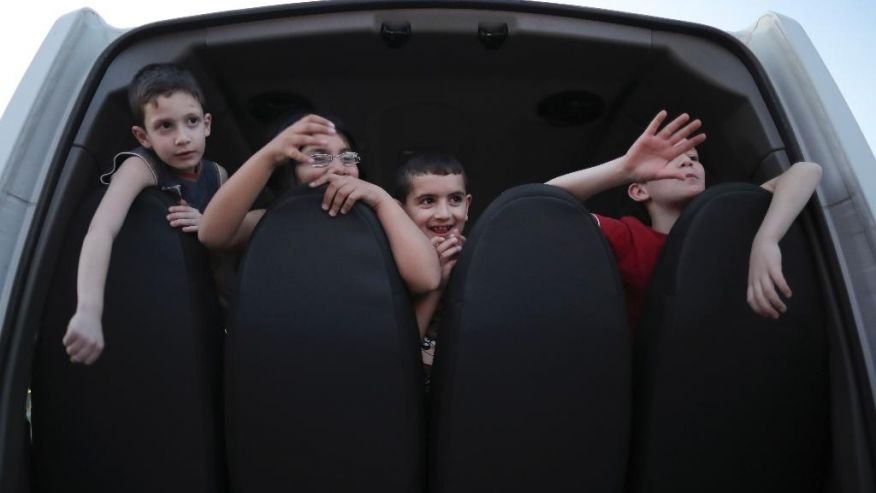 George S. walks on the dark tarmac holding his sleepy 7-year-old son Fadi in his arms.

“From the bottom of our hearts, welcome to San Luis!” a smiling crowd yells at the airport in this Argentine city to welcome them and 10 other Syrians.

While U.S. President Donald Trump has slammed the door shut on Syrian migrants, the governor of Argentina’s San Luis province is happily receiving them through what is seen as the most generous migrant program of its kind in South America. The province is paying for migrants’ flights from Syria and providing housing, jobs, health services, psychological assistance and Spanish lessons so the people escaping civil war can make a new start.

“We feel like we’re alive again,” George said through an interpreter earlier this month after he and his wife and children arrived in San Luis. “I’m relieved and surprised by so much kindness.”

Officials with the United Nations refugee agency, as well as authorities in San Luis province, insisted that George, like the other Syrians accepted into the migrant program, be identified only by their first name and the initial of their last name because of concerns about the safety of relatives still in Syria.

Syrians recently marked the sixth anniversary of their country’s civil war, which has killed more than 400,000 people and displaced millions. A bomb destroyed George’s sewing machinery repair shop in Aleppo, among the country’s fiercest battlegrounds.

The incessant bombing, lack of water and electricity exasperated George and two other Syrian Christian families who began looking for options to escape. The final push came from a priest living in Aleppo, who told them a province in his native Argentina was welcoming Syrian migrants of all faiths.

Financed by the province’s government, the program also accepts contributions from private donors. Guaranteeing jobs for adults, education for their children and health services for all, the plan began in December after San Luis Gov. Alberto Rodriguez Saa attended an international summit at the Vatican on the Syrian migrant crisis.

“These are excruciating situations and it’s natural to think about helping,” Rodriguez Saa told The Associated Press. He said he would urge other provinces to follow suit if necessary as the flow of Syrian migrants grows.

Argentina’s national government has welcomed about 227 Syrian migrants since 2014, but that program is not as encompassing as the one in San Luis. In all, about 1,600 Syrians have arrived in the South American country since the war started in 2011, but it is unknown how many stayed.

Gorgena S., 32, said she is relieved to be far from the relentless bombings. Her 10-year-old deaf daughter, Judy, smiled as she picked up a doll left as a present in their new home.

The girl told her mother through sign language that they have water. “She’s happy that we can take a shower,” Gorgena said.

As she spoke, three boys ran outside in the gardens of a college campus where Syrian families will live temporarily before finding permanent homes.

Despite the warm welcome, the migrants are viewed by some with trepidation.

Luciana Trinci, an English teacher, said the concerns have to do mostly with employment and housing opportunities. “The fear is that with the arrival of people from other countries that it will reduce the possibilities of owning a house or finding a better job,” she said.

The program stands in stark contrast to initiatives in parts of Europe and the U.S. that seek to slow the entry of migrants.

A 2016 deal between Turkey and the European Union stemmed the flow of the hundreds of migrants who once arrived at the Greek island of Lesbos daily to attempt the crossing from Turkey in flimsy boats. But a year later, that agreement appears at risk, raising fears Lesbos will again become the scene of a humanitarian catastrophe.

“To travel by the sea was too dangerous for our children so we had to wait for this moment to arrive,” said Joseph K., who came to San Luis with his wife and two young children after a bomb destroyed their liquor shop.

Trump has sought to suspend entry into the U.S. by Syrians and citizens of six other predominantly Muslim nations, but his order is tied up in the courts.

The U.N. High Commissioner for Refugees advises in the pre-selection of the Syrians for the San Luis program with the help of Argentine religious officials. They obtain their humanitarian visas at Argentine consulates abroad.

More Syrian migrants are expected to arrive in the province in the coming months, said Liliana Scheines, who oversees the San Luis migrant committee.

Under a similar program, Uruguay welcomed 42 Syrians who arrived in October 2014. But the migrants there have failed to adapt and have complained about high costs and lack of job opportunities. About 3,400 Syrian migrants have arrived in Brazil since 2013, but the first who came received far less help then those coming now. Chile has announced it will welcome migrants from Syria, but no plans have yet materialized.

In San Luis, the adaptation process is led by Lana S. and Majd M., the first couple who came under the province’s program.

Majd, a cook who wants to open a restaurant in San Luis, said he felt like he was nothing in Syria, “but here, I feel like I can do many things.

“I can do anything: I can learn the language, I can learn from Argentina, and from its people.”