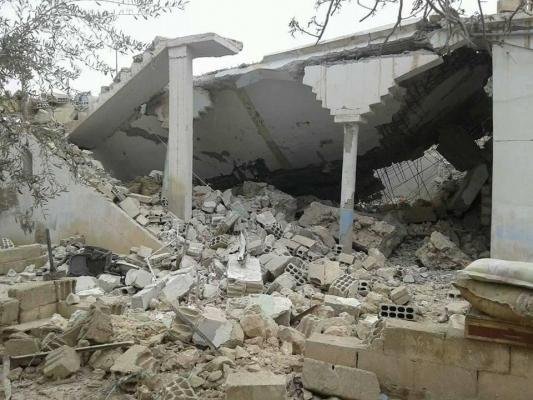 The Britain-based Syrian Observatory for Human Rights said the U.S.-led international coalition against the Islamic State bombed a school being used as a shelter, killing at least 33 civilians.

The Syrian civil war monitor said the airstrike hit a school being used to shelter internally displaced persons Tuesday in the village of al-Mansoura in the western Raqqa Governorate countryside.

The SOHR said one of its activists witnessed 33 bodies being pulled out of the destroyed school’s rubble before Islamic State militants sealed off the area. Local residents told the SOHR more bodies had been recovered, but said its activists could not yet verify the death toll.

At least two people were pulled out alive from the rubble, the SOHR said. The SOHR said the U.S.-led coalition has killed 116 civilians, including children, since March 8 in several locations throughout Syria.

The Raqqa is Being Slaughtered Silently activist group said more than 50 families displaced from the countrysides of the Aleppo and Raqqa Governorates were in the al-Badia school at the time of the airstrike. The RBSS also said the bombings were carried out by the U.S.-led coalition.

“The massacres committed by U.S.-led coalition in Raqqa is unacceptable,” the RBSS said in a statement. “The international community must intervene to stop this.”

Also on Tuesday, RBSS said 20 civilians died in coalition airstrikes in the town of Tabqa.

The bombing at the school comes less than a week after the U.S. military said it carried out an attack on a building in the town of al-Jinah in Aleppo’s western countryside where al-Qaida militants were meeting in Syria. Witnesses on the ground, though, said 46 civilians at the mosque next door were killed.

The U.S.-led international coalition — named the Combined Joint Task Force: Operation Inherent Resolve — said it carried out at least 48 airstrikes from Saturday through Monday near the Raqqa Governorate. Details for bombings carried out on Tuesday were expected to be released later on Wednesday.

“The fate still unknown of 50 families of people who were in al-Badia school in al-Mansoura, west Raqqa,” Mohammed said in a statement.