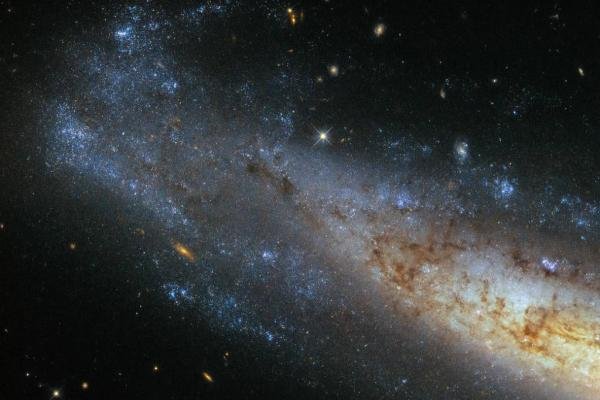 The spiral galaxy NGC 1448 is located 50 million light-years from Earth. It can be appreciated more intimately thanks to a new closeup image captured by Hubble’s Wide Field Camera 3.

Scientists shared the portrait of the frisbee-shaped galaxy on NASA’s website this week.

Often, images of spiral galaxies reveal a cyclone-like disk. From another angle, NGC 1448 would offer a similar representation. Hubble’s camera captured NGC 1448 from a side angle, yielding its amorphous appearance.

Still, the latest image does feature the different components of a spiral galaxy. The galaxy’s core is the solid, bright mass on the right, while the sparkling blue freckles of gas and stars reveal the galaxy’s arms.

Though the spiral galaxy appears to be frozen in space, in reality, it is in constant rotation. For many years, scientists struggled to understand why a spiral galaxy’s arms maintain their structure and fail to become more tightly wound as they rotate.

Astronomers developed density wave theory to explain the appearance of spiral galaxies. They showed galactic arms aren’t materially separate from the core. They simply appear distinct as result of the backup of gas and dust created by the galaxy’s rotation and the gravitational pull of the galaxy’s stars.

Related Topics:NASAScienceSpiral galaxy NGC 1448
Up Next