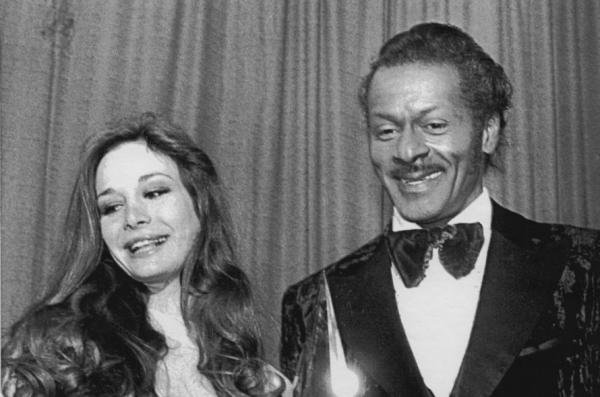 The St. Charles County, Mo., Police Department said officers responded to a medical emergency at Berry’s home and found him unresponsive. Life-saving first aid treatments were unsuccessful and Berry was pronounced dead at the scene at 1:26 p.m., the department said.

The Rock and Roll Hall of Famer first came to stardom in the 1950s along with Elvis Presley, who many music critics have pointed out borrowed heavily from Berry’s sound and brash stage presence. Like Elvis’ gyrating hips, Berry had his own signature stage move: crouching on one leg with his guitar and bouncing across the stage. It became known as the duck walk and has been imitated by rockstars to varying success ever since.

Presley would hardly be the last musician to copy Berry’s pioneering sound and style. Members of the British invasion that soon followed roundly credited him as their inspiration.

“If you tried to give rock ‘n’ roll another name, you might call it ‘Chuck Berry,'” The Beatles’ John Lennon said.

When the Rolling Stones guitarist Keith Richards introduced Berry prior to his induction into the Rock and Roll Hall of Fame, he confessed, “I’ve stolen every lick he ever played.”

Richards and Stones frontman Mick Jagger have said they first bonded over their mutual love of Berry’s music.

Jerry Lee Lewis, another of the 1950s rock pioneers once joked, “[my mama] said, ‘You and Elvis are pretty good, but you’re no Chuck Berry.'”

Praise for Berry was hardly limited to his 1950s and 60s contemporaries. Anthony Kiedis, lead singer of the Red Hot Chili Peppers, a California band that would also redefine genres by blending hard rock and hip hop, called Berry “a musical scientist who discovered a cure for the blues.”

In addition to his unique dance move, guitarists have for 60 years imitated a playing style Berry popularize. He would bend two strings at once on the guitar, a two-stringed lick that imbues the chord with an element of country twang.

“To me, Chuck Berry always was the epitome of rhythm and blues playing, rock and roll playing,” Richards said. “It was beautiful, effortless, and his timing was perfection. He is rhythm supreme. He plays that lovely double-string stuff, which I got down a long time ago, but I’m still getting the hang of.”

Born Charles Edward Anderson Berry, the musician’s first hit was the single “Maybellene” in 1955. The song set the standard for a career defined by spunky guitar licks and lyrics about cars, women and trouble that smashed social mores of the saccharine crooners who filled radio airwaves before him and defined life for a generation of Baby Boomers in postwar America. For later generations, Berry’s music is intrinsically linked to 1950s Happy Days nostalgia.

“Maybellene” went on to sell more than 1 million copies and hit No. 1 on the Billboard R&B chart. However, in a sign of the struggles black musicians of his era faced, many of the white artists who imitated Berry made far more money than he did writing and performing the originals.

Still, the listening public spoke and Berry was what they wanted. Rollicking songs like “Johnny B. Goode” and “Roll Over Beethoven” created a style of music that was unlike any heard before. Young people across the United States immediately flocked to the suggestive lyrics, amped-up R&B chords and driving bass lines, setting the standard for decades of popular music to follow, from the Beatles to Nirvana.

Berry was inducted into the Rock and Roll Hall of Fame in 1986, months after he was honored with a Lifetime Achievement Award at the Grammy’s. Amazingly, it was the only Grammy that Berry ever won, hiving never received one in his prime.

Berry announced on his 90th birthday last year plans to release his first studio album in 37 years and continued to play live, including a standing monthly gig at a bar in his native St. Louis, until the time of his death.