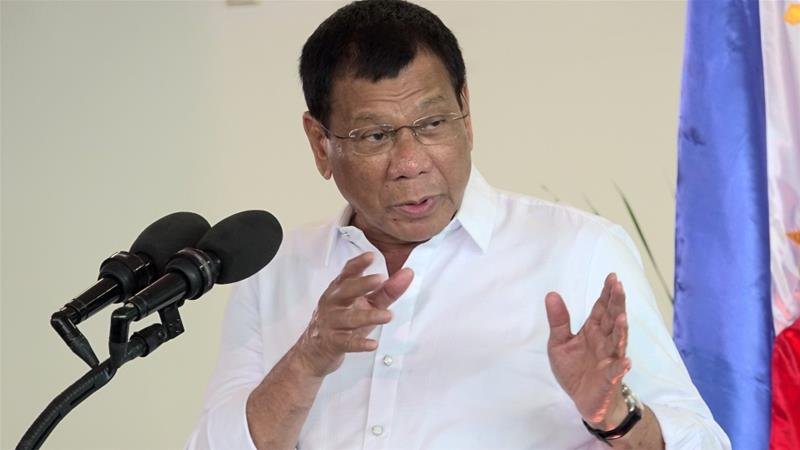 Philippine President Rodrigo Duterte has said he would not be intimidated by the prospect of the International Criminal Court (ICC) putting him on trial over his bloody war on drugs, promising that his campaign would continue and would be “brutal”.

“I will not be intimidated and I shall not be stopped just by what? International Criminal Court? Impeachment? If that is part of my destiny, it is my destiny to go,” Duterte told reporters on Sunday, shortly before leaving for Myanmar.

“The drive against corruption, criminality and drugs will resume and it will continue and it will be brutal,” he said.

“I will not be, for a moment, be out of focus on that. I rose on what I promised and I will fall on that.”

More than 8,000 people have died since Duterte took office on June 30 last year, and began his anti-drugs campaign.

A third of the fatalities were killed in raids and sting operations by police who say they acted in self-defence, while the rest were killed by unknown gunmen.

Rights groups said many of the deaths were assassinations of drugs users with police complicity, allegations that authorities have denied.

But a self-confessed assassin who testified to being in a “death squad” under Duterte, when he was mayor of Davao City, is expected to file a case at the ICC this month or in April, accusing the president of crimes against humanity, his lawyer said recently.

Duterte said he would never “condone the killing of a criminal person arrested with outstretched arms, begging for his life, or what is popularly known as extrajudicial killings.”

“Follow the law and we are alright. Drop shabu and nobody will die tomorrow,” Duterte said. Shabu is the street name for the highly addictive crystal methamphetamine that the government blames for most of the serious crimes in the Philippines.

But Duterte warned: “If you place the guys lives in jeopardy … my order is to shoot you.”

He said he would rather see “thousands or millions of criminals go first”, than see security forces killed in the anti-narcotics war.

Two men, including the one who is expected to file the ICC case, have testified before the Philippine Senate saying they were part of an alleged “death squad” in Davao that killed at Duterte’s behest.

But Senate members found no proof of extra-judicial killings and death squads.

The “death squad” and allegations of drugs-related extrajudicial killings were also among the reasons for an impeachment complaint filed by an opposition lawmaker in Congress against Duterte on Thursday.

Duterte said he was not ruling out the possibility that “scalawags in government who are trying to silence guys dealing with them” were behind these extrajudicial executions.