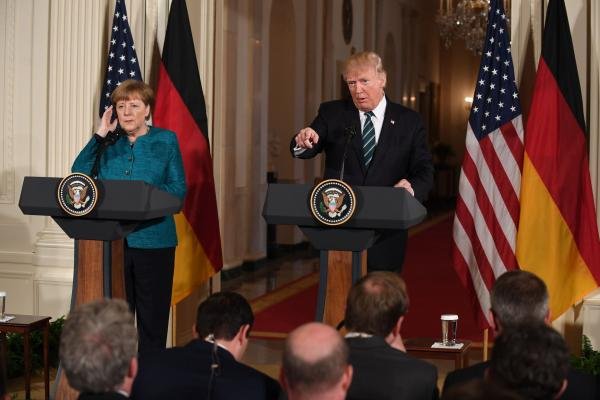 Merkel also said the world must do more to address not just the military response to terrorism, but the refugee crisis that multiple Middle East and African conflicts have created.

Asked about Trump’s stated preference for bilateral trade agreements, Merkel said she would consider negotiations between the United States and the European Union to be bilateral, despite the fact the EU represents 27 member states.

“The president has clearly set out his philosophy for what trade agreements ought to bring about,” she said. “This would then qualify as a bilateral agreement between the European Union and the United States.”

Trump reiterated his position throughout the campaign that trade agreements have to benefit U.S. workers in order to gain his support.

“I don’t believe in an isolationist policy but I also believe a policy of trade should be a fair policy,” Trump said. “I’m a free trader, but I’m also a fair trader.”

Merkel also said economic and political negotiations within the EU and with the United States must consider the plight of tens of millions of refugees who have fled war-torn Syria and violence and poverty in sub-Saharan Africa. She said global economic policy “has to be done looking at the refugees, as well.”

Merkel acknowledged the opposing positions adopted by Germany, which has taken in large numbers of refugees, and the United States under Trump, which has sought to ban them from several of the hardest-hit Muslim countries.

“This is obviously what we have an exchange of views about,” she said.