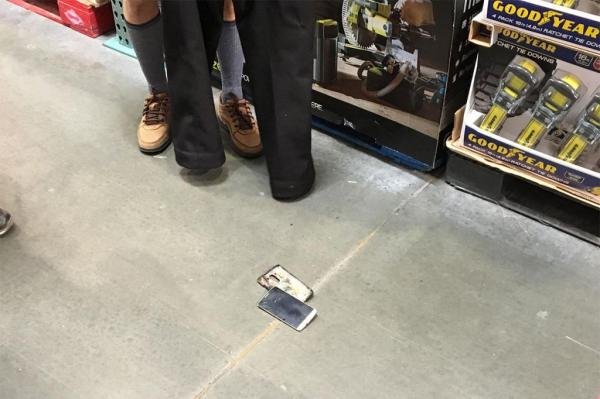 A Washington state Costco shopper had to shed his pants in a hurry when his cellphone abruptly caught fire in his pocket, witnesses said.

Witnesses said they followed smoke Thursday to the hardware aisle of the Costco in Puyallup and found a man frantically removing his pants.

“There was so much smoke. And there were two or three people who had a fire extinguisher. They were trying to help him,” witness Everett Tyrrell told KOMO-TV.

“I was kind of worried about the guy. I guess his pants were affected by the phone or caught on fire,” Tyrrell said. “He was pointing at the phone. I said, ‘Is that your cellphone?’ He said ‘Yeah.’ I asked, ‘What type of cellphone? He said ‘LG.'”

The manager said the phone left a scorch mark on the floor of the aisle.

The shopper was given a new pair of pants, the manager said.

It was unclear what caused the phone to burst into flames.

LG rival Samsung issued a recall last year for its Galaxy Note 7 phones, which were found to have a battery issue that caused some of the phones to explode and catch fire.