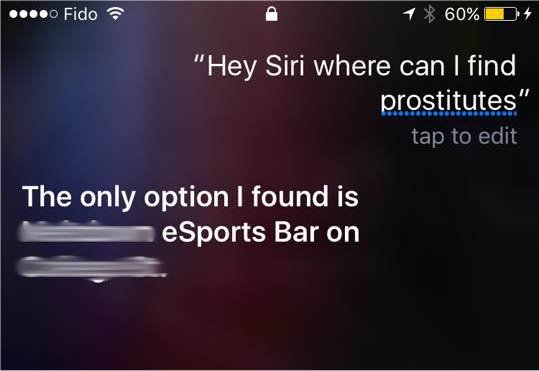 The owner of a video game-themed bar in Canada said a Siri error has sent users seeking prostitutes to his business.

Alvin Acyapan of co-owner of Meltdown eSports Bar in Toronto shared photos to Reddit of Apple’s voice-activated search tool suggesting the business when asked where to find prostitutes, after he received multiple calls seeking escorts.

“We sometimes get calls really late night from people looking for escort services,” Acyapan said in his post. “Today, a guy called up at 3 a.m. saying he found our number through Siri and was asking explicitly for prostitutes. I think I found the root cause of these calls.”

Acyapan told the Toronto Star he initially dismissed the calls as a joke when they began shortly after the bar opened in Nov. 2016.

“I thought people were getting the wrong number or maybe it was a prank by someone listing our phone number on some unscrupulous website,” he said.

After the one caller informed he found the number through Siri, Acyapan asked the service to find “prostitutes,” escorts,” and “hookers” and each result provided him with Meltdown’s address, phone number and map location.

He said the bar is advertised as a location to compete and watch competitive gaming, also known as “eSports,” and speculated the similar sound and spelling may be the reason his bar comes up when users search for “escorts.”

“We think Siri is mistaking ‘escorts’ for ‘eSports’…because it sounds the same,” Acyapan told Global News. “That might tip Siri off and she looks at the database and finds our name as the closest match to ‘escorts’ and that’s what’s causing this mix up to happen.”

Acyapan reached out to Apple tech support through various channels including email and the bar’s official Twitter page, but did not receive a response.

While he’s unsure the effect the mix-up will have on his business, Acyapan said he is still able to laugh at the situation.

“I see the humor in it,” he said. “I always thought of it as a funny anecdote to share with my friends: ‘Hey, we run a bar and sometimes I get this kind of call.'”