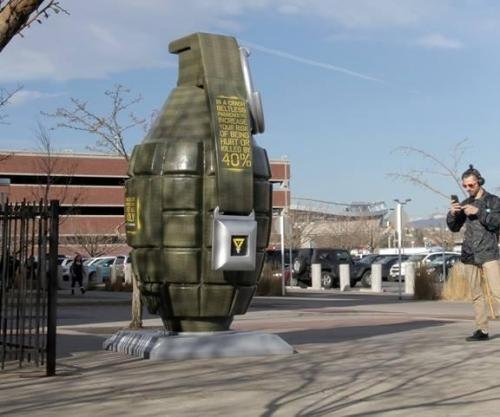 A 9-foot tall statue of a grenade was erected at the University of Colorado to warn about the dangers of driving without a seatbelt.

The Colorado Department of Transportation shared a photo of the giant statue comparing the impact of an unbuckled driver to a grenade.

“In a crash, unbuckled passengers pose a serious risk to others in a vehicle,” the department said. “They can be as dangerous as a…well, the picture says it all.”

The statue was unveiled at the university’s Auraria Campus and the CDOT said it would also be placed around the Denver Metro in the coming months as part of its “Beware of the Beltless campaign.”

“This sculpture is bigger than life, and so is the issue,” Safety Communications Manager for CDOT Sam Cole told KUSA. “We need to change the way people think about beltless passengers.”

Along with sending a message about the dangers of driving without a seatbelt, the CDOT hopes the statue will encourage drivers to ask others to buckle up.