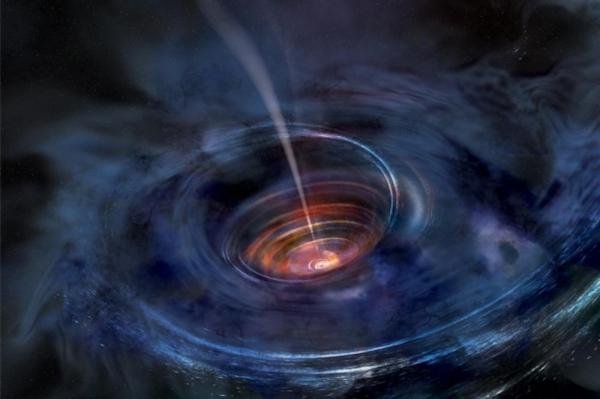 A tidal disruption flare is the burst of electromagnetic activity that occurs when a black hole shreds an unfortunate star and consumes a glut of stellar debris.

While studying a flare discovered on Nov. 11, 2014, astronomers at MIT and NASA’s Goddard Space Flight Center measured fluctuations in the optical and ultraviolet light emitted from the black hole’s accretion disk. Thirty two days after the initial series of fluctuations, researchers noticed the same patterns, this time among X-rays.

Researchers believe supermassive black holes struggle to seamlessly swallow a sudden influx of stellar material. Instead, the consumption process happens in fits and starts, producing a variety of feedback patterns.

“In essence, this black hole has not had much to feed on for a while, and suddenly along comes an unlucky star full of matter,” Dheeraj Pasham, a postdoctoral researcher at MIT’s Kavli Institute for Astrophysics and Space Research, told MIT News. “What we’re seeing is, this stellar material is not just continuously being fed onto the black hole, but it’s interacting with itself — stopping and going, stopping and going. This is telling us that the black hole is ‘choking’ on this sudden supply of stellar debris.”

Many black holes aren’t actively feeding, and thus, are invisible. A tidal disruption flare can alert scientists to the presence of a previously dormant black hole. Happening upon such an event is rare, but technology is helping astronomers more easily identify the phenomena.

Observatories can be programmed to be on the lookout for signatures of a tidal disruption flare. When one is identified, astronomers can be alerted and telescopes can be trained on the event.

“Only recently have telescopes started ‘talking’ to each other, and for this particular event we were lucky because a lot of people were ready for it,” Pasham said. “It just resulted in a lot of data.”

Because supermassive black holes and their host galaxies grow together, researchers believe detailed analysis of tidal disruption flares can illuminate their co-evulationary process. Scientists detailed their latest flare analysis in the Astrophysical Journal.

Scientists uncover cause of obsessive-compulsive disorder

Did humans create the Sahara desert?