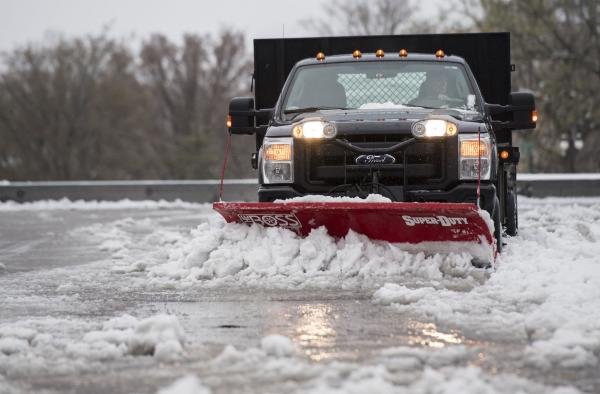 About 70 million people in the U.S. Northeast are under the effect of a winter storm or blizzard warning as a late-season storm system began dumping snow Tuesday, creating travel disruptions and leading officials to close schools.

Connecticut Gov. Dannel Malloy issued a statewide travel ban that began at 5 a.m. on Tuesday and ordered all non-essential first- and second-shift state employees to not report to work.

Dozens of schools throughout Connecticut are closed. Schools in New York City, Boston and Philadelphia are also closed.

New York Gov. Andrew Cuomo declared a state of emergency at midnight on Tuesday ahead of the storm. In New York City, which could see up to 18 inches of snow, the Metropolitan Transport Authority suspended above-ground train services at 4 a.m.

The U.S. House of Representatives in Washington, D.C., canceled votes for Tuesday and are scheduled to meet again late Wednesday.

The Virginia Department of Transportation reported wet roads in the Salem district but no roads affected by snow or ice on Tuesday. The agency warned drivers to watch for possible slick spots.

“During these threatening conditions, I urge all New Jerseyans to remain off the roads so our first responders and public safety officers can safely and efficiently handle emergency situations,” Christie said.

“A major winter storm is unfolding across interior portions of the Mid-Atlantic and Northeast U.S. Winter storm warnings are in effect from eastern West Virginia to Maine, and blizzard warnings from eastern Pennsylvania to southwest Maine,” the NWS said in a statement. “Snowfall amounts in excess of a foot are likely inland along with strong and gusty winds. High winds and tidal flooding are going to be an issue for coastal areas north of the Outer Banks.”

GOP plan would insure 24M fewer in U.S. than ACA over decade: CBO

Arkansas acquires drug for string of 8 executions next month