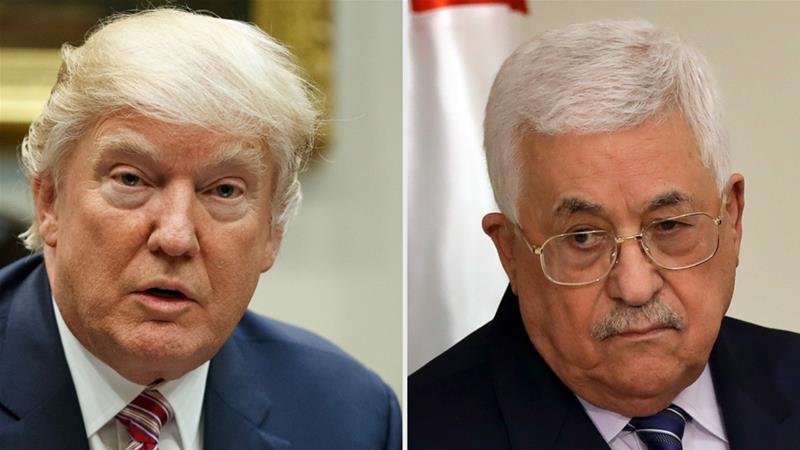 US President Donald Trump has invited Palestinian leader Mahmoud Abbas for a visit to the White House, in the first phone call between the two leaders since Trump’s inauguration on January 20.

Abbas told Trump that peace was a “strategic choice” for the Palestinian people which should lead to the “establishment of a Palestinian state alongside Israel,” Wafa reported.

The White House said Trump told Abbas that he believes a peace deal between Israelis and Palestinians must be negotiated directly by the both sides.

“The president emphasised his personal belief that peace is possible and that the time has come to make a deal,” according to a White House statement.

Al Jazeera’s Patty Culhane, reporting from Washington, DC, said this signals that Trump is going to take a different approach than previous administrations.

“Like most things, he puts things in the language of a businessman. He’s said in the past that it would be the ‘ultimate deal’,” our correspondent said.

“We believe he is going to let his son-in-law Jared Kushner take the lead. It’s not clear how much the Palestinians will trust him. His family foundation has given money to illegal settlements in the West Bank. That is something the likely new US ambassador to Israel has also done.”

Trump’s pick for ambassador, David Friedman, was approved on Thursday by the Senate Foreign Relations Committee. His nomination heads next to the full Senate for a vote.

He has been criticised for inflammatory language used in relation to the Israeli-Palestinian conflict, including calling the two-state solution “a scam”.

In his confirmation hearing, he said that Israeli settlements, which he previously strongly supported, may not be helpful to the peace process.

Israeli settlements in the occupied West Bank are considered illegal under international law and have been major stumbling blocks in negotiations between Palestinians and Israelis.

During that meeting, Trump broke with decades of US policy by saying he was not bound to the two-state solution for ending the Israeli-Palestinian conflict.

“I’m looking at two-state and one-state, and I like the one that both parties like … I can live with either one,” Trump had said, causing consternation across the Arab world and in many European capitals.

The White House has since been more cautious on the issue of the two-state solution, and there has been less talk of moving the US embassy from Tel Aviv to Jerusalem, a promise Trump made during his election campaign.

Palestinians criticised such promises as they hope to make East Jerusalem the capital of their future state, and have had the broad support of the international community for that aspiration.

During his meeting with Netanyahu, the US leader had said he would “love to see” the American embassy move.

Friedman has also said he wants to see the embassy move and expects to work from Jerusalem at least some of the time.

In January, Abbas wrote to Trump telling him not move the US embassy, warning that such a development would have a “disastrous impact on the peace process, on the two-state solution and on the stability and security of the entire region”.

While Abbas was one of the first world leaders former President Barack Obama called, Trump has been cautious with contacts with the Arab world.

He has spoken to Egyptian President Abdel Fattah el-Sisi and met Jordan’s King Abdullah, who flew to Washington for an impromptu visit.

One of the most heated issues of Middle East peace is Israel’s building of settlements in the occupied West Bank, including East Jerusalem, territory Palestinians want for their own state along with Gaza.

During the US election campaign, Trump said he did not necessarily see settlements as an obstacle to peace.

Since his inauguration, Israel has announced plans to build at least 6,000 more settler homes, a substantial increase and an indication that Israel took Trump’s softer language as a green light.

But during Netanyahu’s visit, Trump said he wanted the Israeli prime minister to “hold back on settlements for a little bit”.