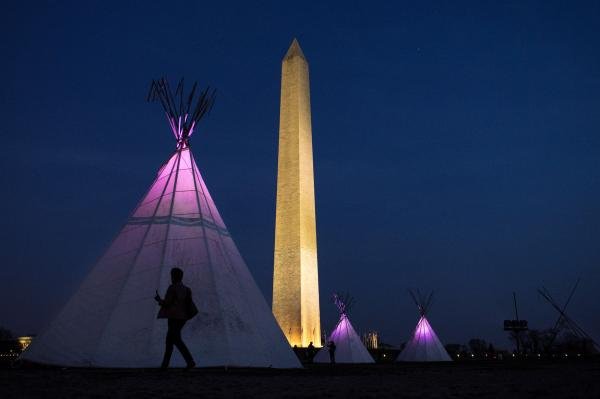 Native Americans from tribes across the country are converging on Washington, D.C., to begin what’s planned to be four days of protests and cultural demonstrations.

Teepees were erected on the National Mall as part of the protest. A march from the mall to the White House and a demonstration across the street in Lafayette Park is planned for Friday, organizers for the group Native Nations Rise said.

The Standing Rock Sioux tribe has fought the project for years, and over the last several months they have created an encampment near the construction zone where clashes between protesters, security and police have at times become violent.

The Standing Rock Sioux have said the pipeline runs over sacred burial ground and threatens their water source where the pipeline would cross the Missouri River, one mile from their reservation.

The tribe is among the leaders of the Native Nations Rise movement and have been critical of Trump for his actions involving the pipeline. Sioux tribal chairman David Archambault II traveled to Washington expecting to meet with Trump administration officials to make the case for permanently halting construction, but was informed upon arrival that the decision to move forward had already been made.

The tribe has filed suit to stop construction in federal court.

In addition to protests, those in attendance for the next four days are planning demonstrations to heighten understanding of traditional Native American culture.