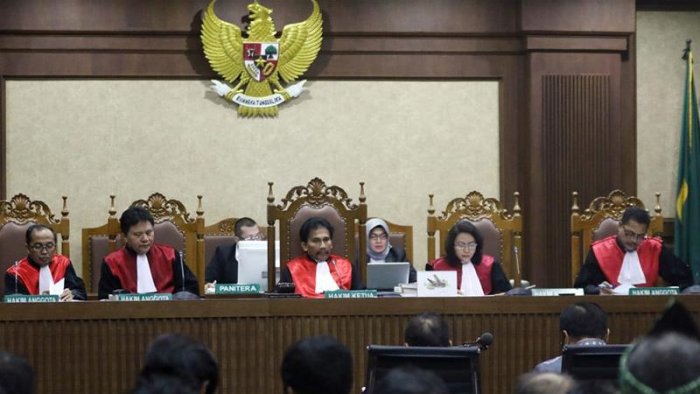 Indonesian politicians were implicated in a major corruption scandal estimated to have siphoned about $170m of government money.

The justice minister, a former interior minister, the current speaker of parliament and provincial governors were among those named in an indictment presented to a special corruption court on Thursday at the start of a trial of two interior ministry officials.

Indonesia’s anti-corruption police allege that a network of about 80 conspirators and several companies used the introduction of a $440m electronic identity card system in 2011 and 2012 to steal more than a third of the funds.

Irman and Sugiharto, the two officials currently on trial, are charged with receiving $4.4m. Prosecutors say the rest of the stolen $172m was distributed among the dozens of other people involved.

The justice minister and parliament’s speaker are from political parties that have thrown their support behind President Joko “Jokowi” Widodo’s government, which initially did not command a parliamentary majority following the election of the maverick candidate in 2014.

The seriousness of the allegations has caused widespread shock in the country.

Transparency International in 2016 gave Indonesia a corruption score of 37 on a 1 to 100 scale, where 100 is completely free of corruption.