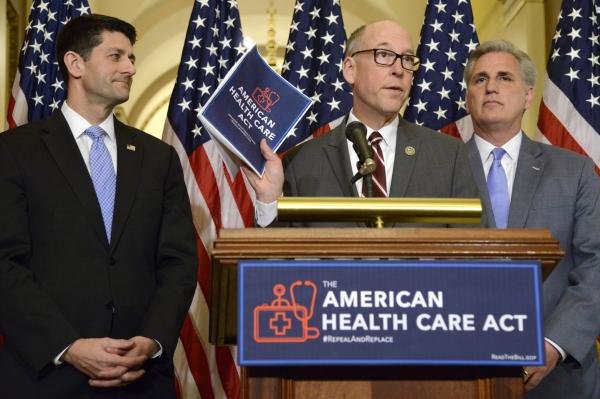 After a marathon, 18-hour session, the House Ways and Means Committee on Thursday approved the American Health Care Act, the Republican’s effort to repeal and replace the Affordable Care Act.

“We’ve just passed historic legislation that will help Americans finally have access to affordable health care,” the committee wrote on Twitter. “We are delivering on our promise to bring relief from Obamacare and empowering Americans to make their own health care decisions.”

The committee, which oversees issues related to taxes, trade, healthcare, welfare and Social Security, debated for about 18 hours and is the first to approve the legislation. The House Energy and Commerce Committee — which will also vote on the legislation — debated well past the Ways and Means Committee’s approval along party lines.

“Ways and Means Republicans just passed legislation that will help Americans finally have access to affordable health care,” Ways and Means Committee Chairman Kevin Brady, R-Texas, said in a statement. “We voted repeatedly to end Obamacare’s crushing taxes and mandates and ensure patients have more power over their own healthcare.”

House Speaker Paul Ryan on Tuesday said the bill will have the necessary 218 House votes to advance to the Senate.

On Wednesday, a group of organizations representing hospitals and nurses said they could not support the GOP bill “as currently written” for multiple reasons, including an estimated “substantial reduction in the number of Americans able to buy affordable health insurance or maintain coverage under the Medicaid program.”

The organizations — including the America’s Essential Hospitals, American Hospital Association, the Association of American Medical Colleges, the Catholic Health Association of the United States and the Children’s Hospital Association — said that maintaining deep provider reductions while also reducing coverage would reduce their ability to provide care to people who will become uninsured and those without adequate insurance.

“We are very concerned that the draft legislative proposal being considered by the House committees could lead to tremendous instability for those seeking affordable coverage. Furthermore, we are deeply concerned that the proposed Medicaid program restructuring will result in both the loss of coverage for current enrollees as well as cuts to a program that provides healthcare services for our most vulnerable populations,” the organizations wrote in a letter sent to lawmakers. “As a result, we cannot support the American Health Care Act as currently written.”

Other organizations, including the libertarian Cato Institute and the FreedomWorks and the Club for Growth conservative groups, have also criticized the GOP plan to replace the ACA.

Republicans have also been criticized for attempting to push the bill too quickly, particularly without analysis from the Congressional Budget Office.

“Republicans are rushing to hold votes before the Congressional Budget Office can detail the devastating consequences of their bill, both in terms of less coverage and higher costs,” House Minority Leader Nancy Pelosi, D-Calif., said Tuesday.

Related Topics:First House committeeGOPObamacareU.S
Up Next

US hasn’t decided yet on Iran nuclear deal – IAEA