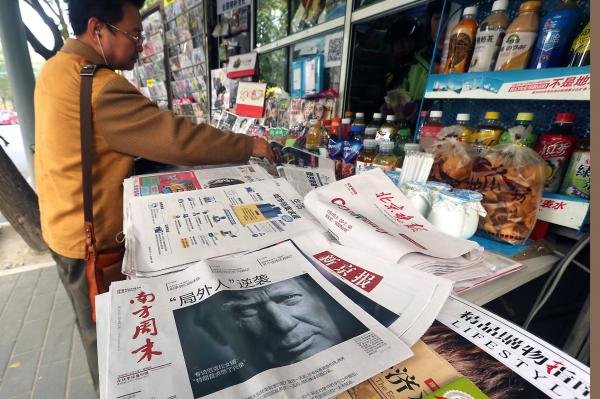 China’s irritation over the deployment of a U.S. missile defense system in South Korea is escalating — and a state-owned newspaper is suggesting retaliatory measures may also need to be taken against the United States, Seoul’s security partner.

According to an editorial in the Global Times published on Thursday, the arrival of THAAD components at Osan Air Base in South Korea this week calls for a response from Beijing, one that can also hold Washington accountable for a decision that has been vehemently opposed in China.

The Chinese government has remained deeply suspicious about U.S. and South Korea motives for THAAD deployment. Beijing has said the system’s radar is capable of monitoring China and parts of Russia, despite assurances from the United States the military equipment is being used solely to deter North Korea missile threats.

“The United States is a key supporter of THAAD deployment,” the editorial read.

The Global Times also pointed out Lockheed Martin, the U.S. maker of THAAD, does not have any business dealings with China, while acknowledging that, given the size of the U.S. economy, it would be strategically disadvantageous for China to hit the United States with sanctions the way it has done with South Korea.

Multiple South Korean companies, particularly the conglomerate Lotte, have been repeatedly penalized for Seoul’s decision. Lotte has also been the target of Chinese hacking threats because of its decision to provide one of its proprietary golf courses for THAAD deployment.

“The United States has deployed a missile defense system right in front of China’s door, and they must pay for that decision,” the Global Times stated. “China must make sure THAAD deployment is being made in vain, by strengthening its own nuclear deterrent.”

The state tabloid also suggested strengthening a strategic alliance with Russia to form a “solid partnership against the missile defense system.”

“They will give a new blow to the United States,” the editorial read.