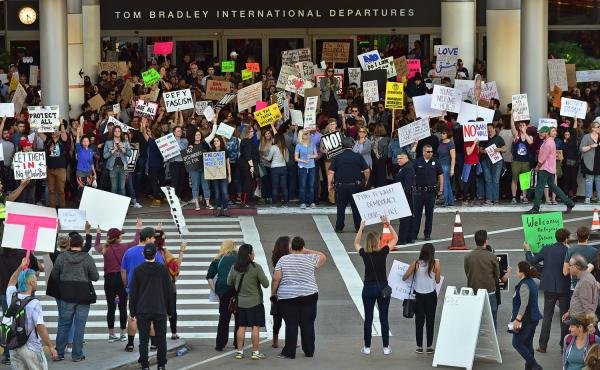 President Donald Trump on Monday signed a revised executive order suspending travel to the United States for people from six majority-Muslim countries, but not Iraq.

The new executive order comes after a previous one in January prompted a legal challenge. A federal judge suspended the earlier order, a move later upheld by an appellate court.

The new order imposes a 90-day ban on the issuance of visas for citizens of six countries: Iran, Syria, Libya, Somalia, Sudan and Yemen. Iraq, listed in the January travel ban, was dropped from the new version of the order.

Additionally, the U.S. refugee program will be suspended for 120 days, and only 50,000 refugees per year, down from the limit of 110,000 set by the Obama administration, will be accepted into the United States.

The new order specifically ensures that lawful permanent residents, known as green card holders, and current visa holders already in the United States will be permitted to stay.

“I think people will see six or seven major points about this executive order that do clarify who is covered,” she said. “If you have travel docs, if you actually have a visa, if you are a legal permanent resident, you are not covered under this particular executive action.”

The changes in Iraq’s status were made in part because of discussions within the Trump administration regarding the handling of the United States’ relationship with Iraq, CNN reported Monday. Secretary of State Rex Tillerson, Secretary of Defense James Mattis and national security adviser Gen. H.R. McMaster all sought Iraq’s removal from the January list for diplomatic reasons that included Iraq’s involvement in fighting the Islamic State. Homeland Security Secretary John Kelly also was supportive of the change.

A senior U.S. official said Iraq was removed from the list after intensive lobbying from the Iraqi government at the highest levels, including during a telephone call between Trump and Iraqi Prime Minister Haider al-Abadi on Feb. 10 and a face-to-face discussion between Abadi and Vice President Mike Pence in Munich on Feb. 18, CNN added.

An unnamed Department of Homeland Security official told The Washington Post Iraq was “treated differently” in the new order in part because it agreed to “timely repatriation” of citizens if they were deported from the United States.

The revised order was signed by Trump without a public ceremony and will be enforced beginning March 16.

The American Civil Liberties Union called the order a ban on entry of Muslims into the United States.

A Facebook statement on Monday by Omar Jadwat of the ACLU said, “The Trump administration has conceded that its original Muslim ban was indefensible. Unfortunately, it has replaced it with a scaled-back version that shares the same fatal flaws. The only way to actually fix the Muslim ban is not to have a Muslim ban. Instead, President Trump has recommitted himself to religious discrimination, and he can expect continued disapproval from both the courts and the people.”