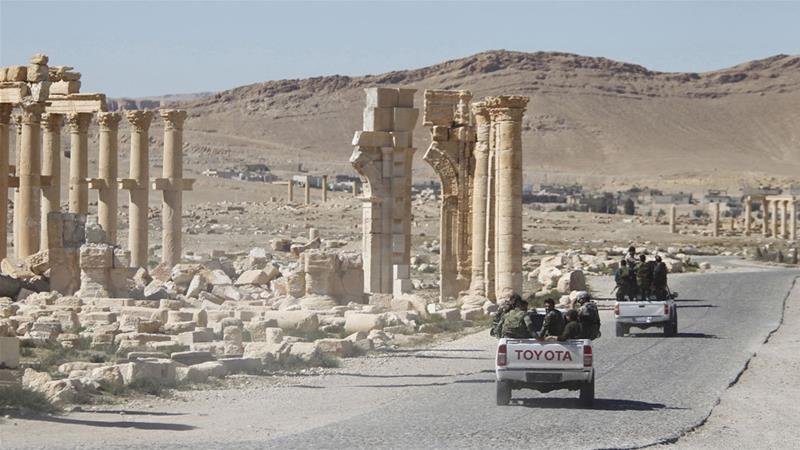 The Syrian army said it has recaptured the ancient city of Palmyra from ISIL for the second time in a year with help from allied forces and Russian warplanes.

The Islamic State of Iraq and the Levant (ISIL) group seized Palmyra in a surprise advance in December after having been driven out eight months before.

“With backing from the Syrian and Russian air forces, units of our armed forces recaptured the city of Palmyra, in cooperation with the allies,” the military said in a statement.

The army and Iranian-backed militia advanced inside Palmyra on Thursday as ISIL withdrew completely, the Syrian Observatory for Human Rights, a Britain-based war monitor, said.

ISIL retreated to areas in the east, the Syrian Observatory reported. Government forces took control of swaths of Palmyra and conducted combined operations to clear landmines, it said.

During ISIL’s first occupation, which ended in March last year, the armed group destroyed some of Palmyra’s priceless archaeological heritage. It is believed to have razed other parts of the historical ruins after regaining control in December.

The Syrian army is also fighting ISIL east of Aleppo city, where it is pushing to reach the River Euphrates, and in the city of Deir al-Zor, where it controls an enclave besieged by fighters.

ISIL is on the back foot in Syria after losing territory in the north to an alliance of US-backed Kurdish-led militias, and to Turkey-backed Syrian rebel groups.

The Syrian opposition, however, declined to congratulate Assad on capturing Palmyra and suggested it was possible the city would change hands again.

Before the civil war gripped Syria in 2011, Palmyra was a top tourist attraction, drawing tens of thousands of visitors each year.

Archeologists have decried what they say is extensive damage to Palmyra’s treasured ruins.

Drone footage released by Russia’s Defence Ministry last month showed new damage ISIL had inflicted to the facade of Palmyra’s Roman-era theatre and the adjoining Tetrapylon – a set of four monuments with four columns each at the centre of the colonnaded road leading to the theatre.

ISIL has destroyed scores of ancient sites across its self-styled caliphate in Syria and Iraq, viewing them as monuments to idolatry.

Maamoun Abdu-Karim, the head of the Antiquities and Museums Department in Syria, told The Associated Press on Thursday this time around the damage to the ruins seemed less in magnitude.

“We had expected the worst. However, the damage, according to the available photos, appears limited,” he said.

But ISIL is not the only side in Syria’s civil war, now in its sixth year, that has damaged Palmyra.

A 2014 report by a UN research agency disclosed satellite evidence of looting while the ruins were under Syrian military control. Opposition fighters have also admitted looting the antiquities for funds.