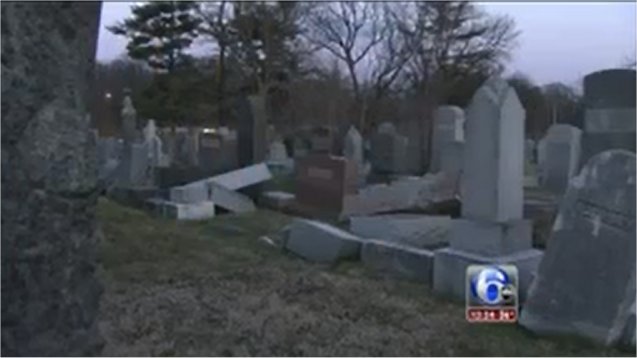 Police have launched an investigation in Philadelphia’s Wissinoming neighborhood after the vandalism of headstones at the Mount Carmel Cemetery, officials said.

Police estimated that up to 100 headstones were damaged, many of which were knocked over, in the incident that occurred between late Saturday and early Sunday. Others, including Rabbi Shawn of Philadelphia’s Zevit Mishkan Shalom Synagogue, said they counted about 500 headstones toppled or damaged.

“This is not just a random act,” he said. “To topple so many headstones clearly is a concerted effort with intent.”

Following the act of vandalism, the Mizel Family Foundation, through the Anti-Defamation League, offered a $10,000 reward for information leading to the arrest and conviction of individuals responsible. The Fraternal Order of Police Lodge #5 offered a $3,000 reward.

On Sunday, a group of people of all faiths visited the cemetery to fix the headstones.

“This is people from Quaker, Muslim, Jewish communities. Some rabbis, my colleagues, we just heard about this thanks to your reporting, and came out here out of the desire to be in solidarity to show that we’re not interested in any narrative about victimization and as heartbreaking as this is, we are strong together,” a rabbi told ABC 6. “I just met two congregants of mine who were here, one whom has relatives. His way of responding was to go row by row and count, and he’s counted over 500 tombstones.”

This act of vandalism follows a similar incident in Missouri where more than 100 headstones were damaged after they were knocked over on Feb. 16 — the same day 11 Jewish community centers in seven states received bomb threats.

Tarek El-Messidi, a Muslim activist, helped organize a fundraiser to help the Chesed Shel Emeth Cemetery in University City, Mo., which raised more than $130,000. He raised more than expected so he vowed to use the remaining money to combat anti-Semitism.

El-Messidi, who lives in Philadelphila, said he would use the funds he raised to help the Mount Carmel Cemetery. He went to the cemetery on Sunday to see how he could help.

“Seeing this in person was very devastating,” El-Messidi said in a statement. “Many people there were embracing one another in tears due to what they saw. I want to ask all Muslims to reach out to your Jewish brothers and sisters and stand together against this bigotry.”

Philadelphia Mayor Jim Kenney said those who carried out this act of vandalism would be punished to the “fullest extent of the law.”

“My heart breaks for the families who found their loved ones’ headstones toppled this morning,” Kenney said in a statement. “We are doing all we can to find the perpetrators who desecrated this final resting place, and they will be prosecuted to the fullest extent of the law. Hate is not permissible in Philadelphia. I encourage Philadelphians to stand with our Jewish brothers and sisters and to show them that we are the City of Brotherly Love and Sisterly Affection.”

The Anne Frank Center for Mutual Respect on Sunday condemned the incident and called on President Donald Trump publicly address rising acts of anti-Semitism and Islamaphobia.

During a tour of the National Museum of African American History and Culture on Tuesday, Trump decried recent threats against Jewish people across the country.

“This tour was a meaningful reminder of why we have to fight bigotry, intolerance and hatred in all of its very ugly forms,” he said. “The anti-Semitic threats targeting our Jewish community and community centers are horrible and are painful and a very sad reminder of the work that still must be done to root out hate and prejudice and evil.”

The center criticized Trump’s reaction to such acts as “too little, too late.”

“We are sickened, sickened, sickened. More Jewish gravestones were found vandalized today, this time in Philadelphia. Mr. President, it’s time for you to deliver a prime-time nationally televised speech, live from the Oval Office, on how you intend to combat not only anti-Semitism, but also Islamophobia and other rising forms of hate,” the center wrote in a statement. “Whether or not your intention, your presidency has given the oxygen of incitement to some of the most viciously hateful elements of our society. Unlike your delayed reaction to hatred in the weeks since you took office, you now need to act fast, boldly and specifically. How you react in the coming hours is vital to the greatness of America.”

Trump to propose $54B increase in defense spending