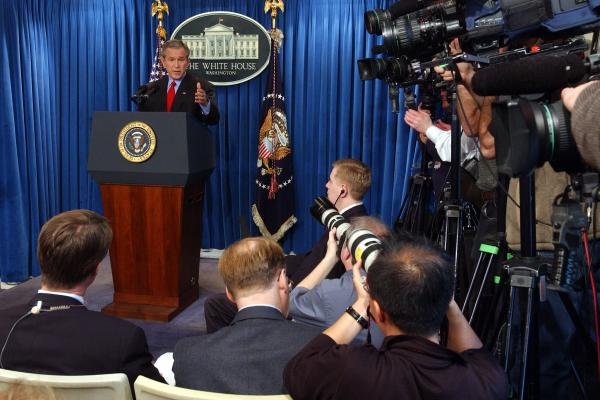 Having spent eight years in the White House in today’s modern political climate, former President George W. Bush said Monday that he came to view the news media as an “indispensable” part of a functioning democracy.

“I considered the media to be indispensable to democracy,” the former president said with a laugh, after being asked whether he ever considered journalists enemies. “We need an independent media to hold people like me to account.”

“Power can be very addictive and it can be corrosive,” he continued. “It’s important for the media to call to account people who abuse their power.”

Though he is only eight years removed from office, Bush said the information climate has evolved substantially with the advent of social media channels and additional news outlets.

“It is hard to unify the country, though, with the news media being so split up,” he said. “When I was president [the media] mattered a lot more because there was like three [news networks]. Now there is all kinds of information being bombarded out, and people can say things anonymously. It’s just a different world.”

Saturday, Trump announced that he would not attend April’s White House Correspondents’ Dinner — an annual event honoring the press’ relationship with the White House. The last president to miss the dinner was Ronald Reagan in 1981, who was still recovering from an assassination attempt a month earlier. Multiple news outlets also canceled traditional parties after the event due to Trump’s constant disparagement of critical news outlets and nonstop claims that they are pushing “fake news.”

Like all commanders in-chief, Bush faced frequent media criticism during his presidency — from his handling of the war on terrorism to his government’s response to Hurricane Katrina. He also received his fair share of praise for various facets of his administration, perhaps none more notable than his even-tempered response to the 9/11 terrorist attacks in 2001.

In speaking of Trump’s presidency, Bush cautioned that the controversial leader has only been in office for five weeks and said he genuinely believes the current president wants to unify the country.

On Russia, though, Bush indicated that transparency on the matter is important.

“We all need answers,” he said of allegations that Trump’s campaign had communications with Russian intelligence agents prior to last year’s election. “Whether or not [a] special prosecutor is the right way to go, you’re talking to the wrong guy.”

Democrats have called for an independent prosecutor to look into the case to ensure objectivity. Bush, though, said he has faith that congressional intelligence investigators will find the truth.

“If [Senate Intelligence Committee head Richard Burr] were to recommend a special prosecutor, it would have a lot more credibility with me. … I’m not sure the right avenue to take. I am sure, though, that [Russian] question needs to be answered.”

Bush touched on several other topics during the interview, including the notion that Muslims should be barred from the United States.

“I think it’s very important for all of us to recognize one of our great strengths is for people to be able to worship the way they want to, or not worship at all,” he said. “I understood right off the bat that this was an ideological conflict, and people who murder the innocent are not religious people. They want to advance an ideology.”

“I think it’s very hard to fight the war on terrorism if we are in retreat. I think we learned that lesson,” he said of Trump’s Executive Order 13769, which seeks to suspend U.S. travel for all refugees and immigrants from seven largely-Muslim countries. “I am for an immigration policy that is welcoming and that upholds the law.”

Trump to propose $54B increase in defense spending