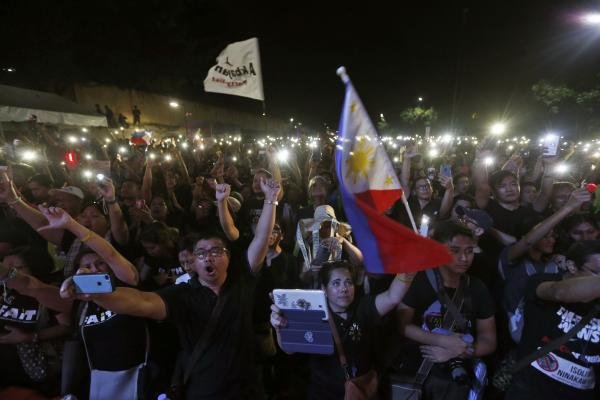 Thousands of people rallied to support and protest Philippines President Rodrigo Duterte on the anniversary of the revolt against a former dictator.

Crowds of demonstrators marched through the streets of the country’s capital in Manila to the spot where the People Power Revolution held a peaceful rally that unseated dictator Ferdinand Marcos in 1986.

While protesters and supporters of Duterte were present at the annual celebration, the president spent the weekend at his southern home in Davao.

The protests against Duterte came amid a large increase of drug-related deaths rumored to be sanctioned by his administration and following the arrest of one of his most outspoken critics Sen. Leila de Lima on Friday.

Former Philippine President Benigno “Noynoy” Aquino III attended the anti-Duterte rally and said this anniversary was not just about remembering the past, but fighting for the present.

“[The] fight is not over if we are not ready to defend our rights,” he said.

A group of Duterte supporters held their own rally where they prayed for Duterte’s success in his war on drugs and listened to Christian songs and testimonies of former addicts.

The two sides clashed briefly when a group of Duterte supporters turned up at the anti-Duterte rally, but police intervened.

Anti-Duterte protester Simon Valencia, 28, also helped diffuse the situation by handing flowers to the seven Duterte supporters as a gesture to support their reedom of expression.

Related Topics:AsiaPhilippinesRodrigo Duterte
Up Next