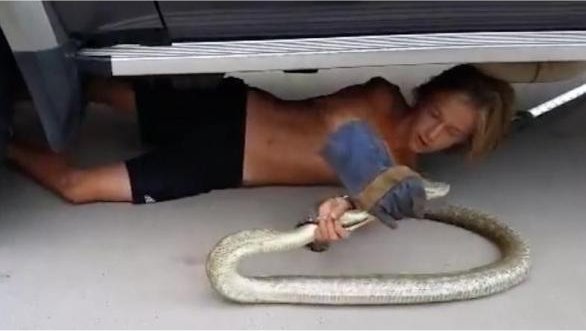 A daring teenage boy in Australia earned the nickname “snake boy” after pulling a large snake from the undercarriage of an SUV.

Video uploaded to Facebook by Yogi McDougall from Queensland shows the teen Oli Wardrop pulling the lengthy snake from underneath the vehicle before leaving for school.

The teen wrestles with to grab the snake by the head as it begins to slither its way up and into the vehicle while his father lay on the ground holding a hook and grabbing the snake by the tail.

He then proceeded to pull the snake out with a gloved hand placed firmly around its head, as he carefully place the snake in a large bag.

Onlookers congratulated Wardrop for his bravery and skill as he was rewarded with a handshake from his father.

“That’s my boy. Been wrangling snakes since he was five,” his father said.

Smartphone app lets you take selfies with your dead