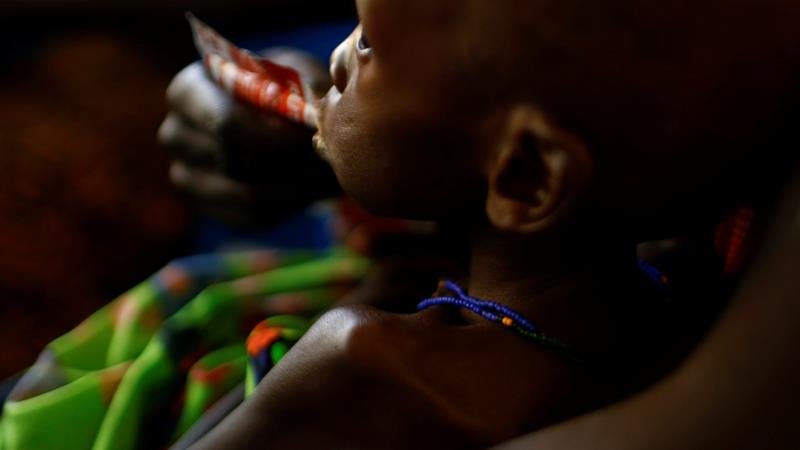 Famine has been declared in two counties of South Sudan, according to an announcement by the South Sudan government and three UN agencies, which says the calamity is the result of prolonged civil war and an entrenched economic crisis that has devastated the war-torn East African nation.

The official classification of famine highlights the human suffering caused by South Sudan’s three-year civil war and even as it is declared President Salva Kiir’s government is blocking food aid to some areas, according to UN officials.

More than 100,000 people in two counties of Unity state are experiencing famine and there are fears it will spread as an additional one million South Sudanese are on the brink of starvation, said the announcement.

“The concern is not just about the 100,000 civilians that are facing famine at the moment,” said Al Jazeera’s Hiba Morgan, reporting from Juba. “There are about one million more people that are on the brink of famine.

“Also, one out of every three households in South Sudan is currently facing food insecurity.”

“Our worst fears have been realised,” said Serge Tissot, head of the Food and Agriculture Organization in South Sudan.

He said the war has disrupted the otherwise fertile country, causing civilians to rely on “whatever plants they can find and fish they can catch”.

Roughly 5.5 million people, or about 50 percent of South Sudan’s population, are expected to be severely food insecure and at risk of death in the coming months, said the report.

It added that nearly three-quarters of all households in the country suffer from inadequate food.

If food aid does not reach children urgently “many of them will die,” said Jeremy Hopkins, head of the UN children’s agency in South Sudan.

Over 250,000 children are severely malnourished Hopkins said, meaning they are at risk of death.

It is not the first time South Sudan has experienced starvation. When it fought for independence from Sudan in 1998, the territory suffered from a famine spurred by civil war.

Anywhere from 70,000 to several hundred thousand people died during that famine. But Monday’s declaration of starvation is solely South Sudan’s creation, and a UN official blamed the country’s politicians for the humanitarian crisis.

“This famine is man-made,” said Joyce Luma, head of the World Food Programme in South Sudan. “There is only so much that humanitarian assistance can achieve in the absence of meaningful peace and security.”

“The conflict made it impossible for many people to farm, especially in the equatorial regions, which was previously stable until the conflict broke out in July.”

Nowhere else has civil war caused such a drastic decline in South Sudan’s food security than in Central Equatoria state, according to the report.

Traditionally South Sudan’s breadbasket, Central Equatoria has been hit by fighting and ethnically targeted killings that began in July 2016 and have displaced over half a million residents and disrupted agricultural production.

South Sudan’s widespread hunger has been compounded by an economic crisis, as well. South Sudan is experiencing severe inflation, which has made food unaffordable for many families.

“There is 800 percent inflation in this country at the moment, food market prices have become unaffordable for a lot of people,” Al Jazeera’s Morgan said.

When The Associated Press news agency visited the western town of Aweil in September, the price of food had risen ten-fold in the previous 12 months.

Although it is not as significant as the effects of war and inflation, some of South Sudan’s hunger crisis is the direct result of the government’s action.

South Sudanese government officials have blocked or placed constraints on the delivery of food aid to areas of the country, according to a UN official who insisted on anonymity because of lack of authorisation to speak to the media.

But Al Jazeera’s Morgan said the reason behind the lack of humanitarian access is a lot complicated.

“There is fighting between the government and various armed groups,” she said.

“So it is quite hard to bring humanitarian aid to the areas affected by this famine. Humanitarian organisations do not know who is operating some parts of the country at any given time, they don’t know how to communicate with people in charge, and this causes some kind of a barrier for humanitarian aid.”

“Most civilians are basically in the bush, most of South Sudan’s population, 70 percent, is in the bush. It is very hard for the aid to reach these people.”

On Monday, the UN agencies said that unimpeded humanitarian access “is urgently needed”.

Tens of thousands of people have died since civil war broke out in December 2013, and the UN warns that South Sudan is at risk of genocide.

Since fighting in the capital of Juba killed hundreds of people in July, the war has uprooted more than three million people.

UN officials have contested that hunger in South Sudan is even more shocking because of the country’s fertile land conditions. During her farewell briefing in November as head of the UN mission, Ellen Loj said that South Sudan has the resources and climate to feed itself.

“When I am flying up country, I am always surprised to see all that fertile land and there is not anything,” Loj said.

“You could feed yourself plenty and I hope peace will come to South Sudan.”

U.S. military unsure how many civilians killed in Yemen raid