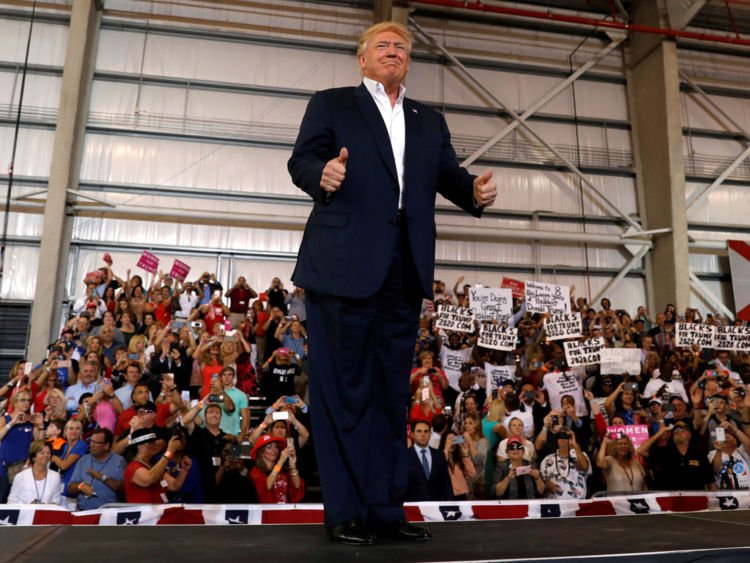 Donald Trump has said his reference to a non-existent incident in Sweden was based on a TV report he had seen on Fox News.

The President had left many people scratching their heads – including the Swedish government – after he falsely suggested there was an immigration-related security incident in the country on Friday night.

No such incident had occurred – and hours after baffled Swedish officials asked the US State Department for clarification on Mr Trump’s remarks, he tweeted: “My statement as to what’s happening in Sweden was in reference to a story that was broadcast on @FoxNews concerning immigrants & Sweden.”

Fox News had ran a report on Friday night about alleged migrant-related crime problems in the country – and it is possible Mr Trump was confusing clips from the documentary with a real-time event.

According to a White House spokeswoman, Mr Trump had been referring generally to rising crime in Sweden, but not a specific incident in the Scandinavian country.

But even this is at odd with official statistics. They show Sweden’s crime rate has fallen since 2005, despite the country taking in hundreds of thousands of immigrants from war-torn countries such as Iraq and Syria.

Swedish tabloid Aftonbladet obligingly listed several events that did take place on Friday in Sweden, including a man being treated for severe burns, an avalanche warning and police chasing a drunken driver.

It is not the first time that the President and his team appear to have invented facts.

At a news conference on 16 February, Mr Trump falsely claimed that his Electoral College win was the biggest since Ronald Reagan’s. This is not true.

Both of Barack Obama’s Electoral College wins, both of Bill Clinton’s and George W Bush’s were all bigger than Mr Trump’s.

On 29 January, Trump aide Kellyanne Conway referred to the “Bowling Green massacre” as justification for the administration’s travel ban.

However, there has never been a massacre at Bowling Green. It is speculated that Conway actually meant the arrest of two Iraqi refugees in Bowling Green, Kentucky in 2011 for attempting to send money to Al Qaeda.

Photographs taken of the two events clearly showed that this was not true.

During his speech, Mr Trump also said that he wanted to address the crowd “without the filter of fake news” – and insisted the “dishonest media” is part of a “corrupt system”.

Mattis to Iraqis: U.S. not in Iraq ‘to seize anybody’s oil’