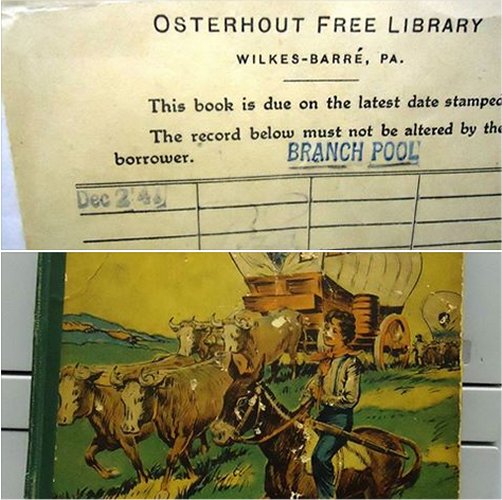 A Pennsylvania library said it waived a $554 late fee for a book that was returned by a man whose father checked it out more than 75 years ago.

The Osterhout Free Library in Wilkes-Barre said in a Facebook post that the book, Val Rides the Oregon Trail by Sanford Tousey, was checked out on Dec. 2, 1941 — five days before the Japanese attack on Pearl Harbor — and was returned Wednesday.

Robert Lockman, Jr., said he recently found the book in the basement of his Shavertown, Pa., home and discovered that his father, Robert Lockman, Sr., had checked it out when he was only 9 years old.

Lockman, whose father died in 2013, said he would have wanted the book returned.

“I thought it would be the right thing to do,” he told The Citizens’ Voice newspaper. “My dad was an honest guy. That’s what he would have done.”

Lockman joked he was a little worried about the late fee.

“Well, my first thought was, I wonder if they’re going to want the fine!” he told WNEP-TV.

Lockman didn’t need to worry. Library officials decided to waive the fee, which would have been about $554.

“We just laughed about it,” circulation clerk Jeannette Karaska said.