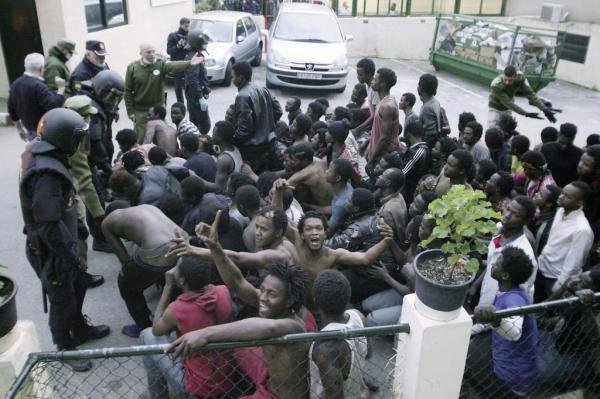 Nearly 500 migrants smashed through a fence separating Morocco from the Spanish enclave Ceuta in an attempt to gain access to the European continent.

Ceuta regional government officials said 498 people, some wielding clubs, attempted to break through multiple gates in the 20-foot fence. An estimated 200 people were prevented from crossing and dozens of the migrants required medical treatment after trying to scale the fence, which is topped with razor wire. Eleven Spanish police officers were also injured during the incident.

Many of those who successfully broke through the barrier celebrated on Spanish land, draped in European flags while shouting “freedom.”

Most of those detained on Spanish soil are taken to a detention center, ITV reported. From there they are either repatriated or formally seek asylum as political refugees.

Ceuta is one of two Spanish enclaves on the African continent. It is separated from mainland Spain by the Strait of Gibraltar. The areas are the only parts of the Eurozone that share a land border with Africa, making them popular spots for migrants seeking entry into Europe to attempt a border crossing.