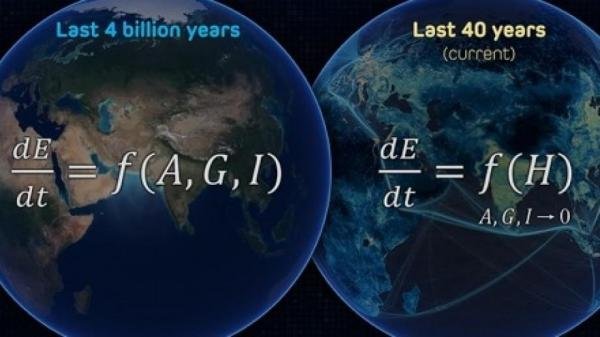 Scientists at the Australian National University have come up with a simple equation to calculate the impact of human forces on planet Earth. The numbers suggests humans are accelerating climate change by a factor 170 times greater than natural forces.

“Over the past 7,000 years the primary forces driving change have been astronomical — changes in solar intensity and subtle changes in orbital parameters, along with a few volcanoes, ” Will Steffen, a professor at ANU’s Climate Change Institute, explained in a news release. “They have driven a rate of change of 0.01 degrees Celsius per century.”

“Human-caused greenhouse gas emissions over the past 45 years have increased the rate of temperature rise to 1.7 degrees Celsius per century, dwarfing the natural background rate,” Steffen said.

Steffen and his colleagues distilled the input and output factors of climate change into a single formula — the Anthropocene equation.

“Crystallising this evidence in the form of a simple equation gives the current situation a clarity that the wealth of data often dilutes,” Steffen said. “It also places the contemporary human impact in the context of the great forces of nature that have driven Earth system dynamics over billions of years.”

Researchers detailed the equation in The Anthropocene Review.

The study arrives in the wake of fresh calls for a more comprehensive approach to climate change, one that better accounts for human activity. In a recent report, researchers at the University of Maryland called for models to better account for population growth, migration patterns, shifting resource use, land-use changes, emissions and pollution.

“Current models are likely to miss critical feedbacks in the combined Earth-Human system,” said Eugenia Kalnay, a professor of atmospheric and oceanic science at Maryland.

Are we living in a giant hologram?