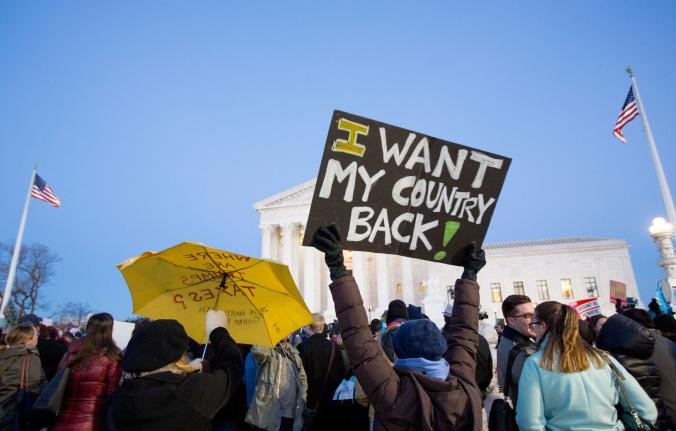 President Donald Trump on Friday found no relief on the East Coast, either — a day after three California appellate judges backed a court order blocking the American leader’s move to deny U.S. entry to thousands of refugees and immigrants.

Because of the mounting legal defeats, the White House may now seek a new strategy.

Addressing the case Friday, Brinkema doubted Justice Department claims that Trump’s ban on immigrant travel is a security measure based on threats of terrorism.

The state of Virginia alleges in the case that the order is a “monumental abuse of executive power” intended to make good on Trump’s campaign pledge to bar all Muslims from entering the United States.

It’s still unclear if Trump’s administration will appeal the case to the Supreme Court — or simply scrap the order and create a new one. The president said Friday that new security measures will be announced next week.

Trump Chief of Staff Reince Priebus said Friday the White House is looking at all options — including an appeal to the Supreme Court.

“I don’t have a scintilla of evidence that counters this argument,” Brinkema said, calling the executive action “broad and imprecise.”

“The courts have been begging [the Justice Department] to provide some evidence and none has been forthcoming,” she said, claiming the order has “all types of deficiencies.”

Thursday evening, a federal appeals court in San Francisco ruled against the order and said a temporary restraining order blocking the ban can continue while the case is fully evaluated by lower courts. The decision was a major setback for Trump’s administration.

The president reacted to Thursday’s decision sternly, calling it a “disgraceful decision” and pledged to “see you in court!”

Brinkema did not issue a ruling Friday but pledged one as soon as possible. If she rules for the state, it would strengthen the injunction already in place. If she favors the government, it would break ranks with Thursday’s ruling and perhaps hasten a showdown in the U.S. Supreme Court.

During a news conference with Japanese Prime Minister Shinzo Abe on Friday, Trump again denounced the ruling and said he is confident his order will ultimately be upheld.

The president has said the order is entirely intended as a temporary security measure, and is not a blanket ban against Muslims.

Body of KKK leader found near river in Missouri