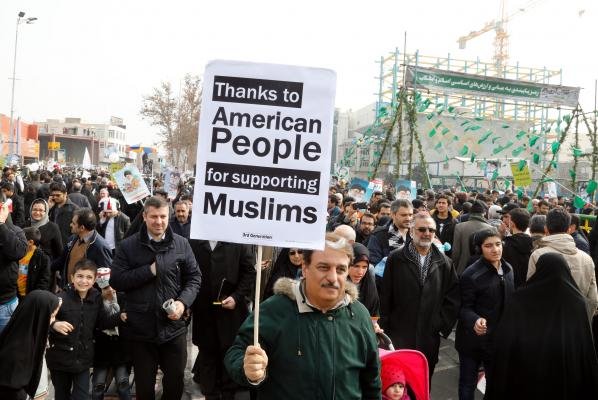 Almost exactly 38 years after an Islamic insurgence knocked down the last leg of Iran’s royal monarchy — a victory that would later set off an epic standoff with the United States — Tehran on Friday celebrated the historical milestone while casting a leery and watchful eye on the new American president.

Rallies around Iran on Friday marked the national holiday celebrating the 1979 Islamic Revolution, which ousted the U.S.-backed shah. Anti-American rhetoric at this year’s commemoration, however, was more subdued than usual.

Some expected harsh government condemnation towards President Donald Trump’s new administration, but none was uttered — not by President Hassan Rouhani or Supreme Leader Ali Khamenei.

The revolution began in January 1978 when a group of religious students clashed with police over a newspaper article critical of Islamic cleric Ayatollah Ruhollah Khomeini, written by an agent of the shah’s government.

The movement picked up steam for the next 13 months and culminated in the overthrow of Shah Mohammad Reza Pahlavi’s regime on Feb. 11, 1979. What followed was an Islamic government that remains to this day — one that has never enjoyed good relations with the United States,

Some political observers believe Tehran held its collective tongues Friday largely out of fear of further inciting Trump. The new American leader has so far threatened to dispose of the landmark 2015 nuclear agreement, which eased sanctions against Iran, and included the country on a list of nations barred from sending immigrants to the United States.

“American people are welcome and invited to visit Iran,” one sign protesting the ban stated.

New sanctions were ordered this month against several Iranian people and companies for Tehran’s testing of a ballistic missile that Trump’s administration believes violated a U.N. resolution.

“Today’s rally shows that the government does not want any confrontation with the U.S.,” Farshad Ghorbanpour, an expert close to Rouhani’s government, said. “Don’t be surprised, we have no interest with tensions.”

There were some signs of anti-American sentiment on the Iranian holiday, however — as is usually the case on this particular holiday.

American and Israeli flags were burned and walked on, leaflets were passed out depicting an Iranian fist punching Trump in the face — with the words “down with USA” — and some demonstrators hung Trump in effigy.

“Iranian people are like this,” Ali Farhadi, a retired member of Iran’s Revolutionary Guard Corps, said. “When they get threatened, they get motivated and are enticed to come out and show resistance.”

On social media in recent days, some Iranians called for restraint — and others sought to express thanks to the American citizens who have protested against Trump since his election.

“Thanks to American people for supporting Muslims,” one demonstrator’s sign read.

Rouhani, who since his 2013 election has sought better relations with the United States, is up for reelection in May. Approval ratings suggest he has enough support to continue as president. No Iranian president has failed to win a second term since Mohammad-Ali Rajai was assassinated in 1981.

Some said Friday they wished for a return of Mahmoud Ahmadinejad as president, as they said the fiery hardline leader would be a better counterweight to Trump. Ahmadinejad, however, is barred by Khamenei from seeking the presidency again.

Nine months after the 1979 revolution was completed, a group of Iranian students stormed into the American embassy in Tehran and took 60 hostages. Seven were released after a few days and another was freed eight months later. Fifty-two, though, spent 444 days in captivity in what became known as the Iran Hostage Crisis. To this day, the ordeal is still considered Iran’s greatest triumph over the United States.

The final hostages were released on Jan. 20, 1981, after President Ronald Reagan was inaugurated — an intentional move by Tehran as a final gesture against former President Jimmy Carter.