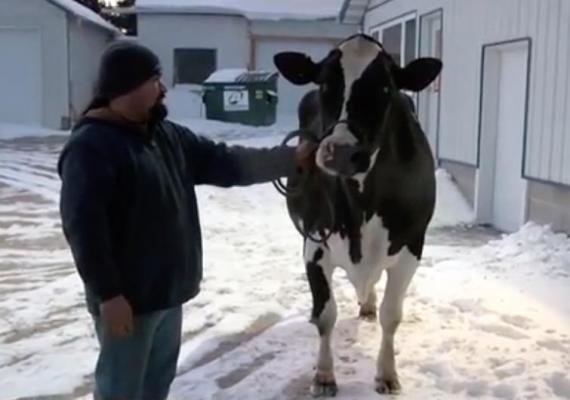 A cow from Wisconsin set a national record by producing nearly 77,500 pounds of milk in 2016.

“My Gold is an excellent example of what a Registered Holstein cow can accomplish when excellent genetics, care, and management are combined. This cow excels in both production and type,” CEO of Holstein Association USA, Inc. John Meyer said.

The cow’s production topped the previous record of 74,650 pounds of milk set in 2015 by fellow Wisconsin cow Bur-Wall Buckeye Gigi.

The average production of U.S. Holstein herds enrolled in production-testing programs in 2015 was 24,958 pounds of milk, 920 pounds of butterfat and 710 pounds of protein.

Co-owner of Ever-Green-View Farms Tom Kestell told Wisconsin Public Radio the cow’s performance was similar to that of a world class athlete.

“It’s just like watching Usain Bolt run the 100-yard dash: it’s not hard on him. He just does it,” he said. “It’s just something that these cows are bred to do and if everything falls in place, then they express that ability.”

Kestell and his family have been working with My Gold and the rest of her family, including several other offspring for 30 years, and have gone to great lengths to help their cows produce as much as possible.

“They have to eat well, they have to ‘train’ well, but you have to keep in peak condition,” he said. “And it’s very important that their environment is conducive to them reaching their genetic potential.”

Googly-eyed robot beats ‘I am not a robot’ Captcha test