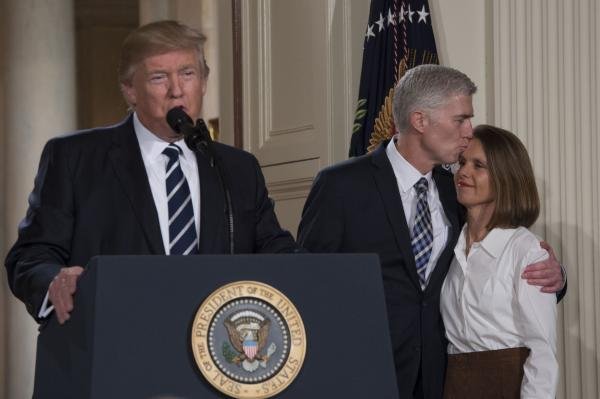 Trump announced his pick Tuesday evening — a disclosure that was greatly anticipated all day.

“Today, I am keeping another promise to the American people by nominating judge Neil Gorsuch,” Trump said. “I made a promise .. I would find the very best judge in the country for the Supreme Court. I promised to pick somebody who respects our laws and is representative of our Constitution and who loves our Constitution.

Gorsuch, 49, is a judge of the U.S. Court of Appeals for the Tenth Circuit in Colorado — appointed to the federal post by former President George W. Bush in 2006.

The appellate judge, a graduate of Columbia and Harvard, began his law career as a clerk for the U.S. Court of Appeals in Washington, D.C., and then for Supreme Court Justices Byron White, a fellow Colorado native, and Anthony Kennedy. He later worked in private practice for a decade.

“Standing here in a house of history and acutely aware of my own imperfections, I pledge that if I am confirmed I will do all my powers permit to be a faithful servant to the Constitution of laws of this great country,” Gorsuch said.

“I am so thankful tonight for my family, my friends and my faith. These are the things that keep me grounded. … I am honored and I am humbled.”

One key issue Gorsuch has weighed heavily on is freedom of religion — having sided with Christian employers and religious organizations in past litigation, including a landmark federal appeals case involving craft store Hobby Lobby three years ago. The store refused to comply with federal health law in covering emergency contraception.

Gorsuch is also said to be an advocate of capital punishment and opposes abortion.

“The towering judges that have served in this particular seat … are much in my mind at this moment,” Gorsuch said. “Justice Scalia was a lion of the law.”

Trump said last week that he planned to announce the pick Thursday, but moved the event up by two days. The president summoned both Gorsuch and Thomas Hardiman, the other finalist for the job, to Washington on Tuesday, which built up a bit of drama surrounding the appointment.

Gorsuch is the first nominee to the high court since former President Barack Obama appointed Merrick Garland last year — a nomination that was never considered by the Republican-controlled Senate.

Some Democrats pledged to filibuster whoever Trump nominated to replace Scalia, unless it was Garland, in what some might view as effective payback for the GOP’s stalling Obama’s pick last year.

“This is a stolen seat,” Sen. Jeff Merkley, D-Ore., said. “We will use every lever in our power to stop this.”

With enough Democratic support for a filibuster, Gorsuch would need 60 votes in the Senate to gain confirmation.

Senate rules allow any senator to object to a swift confirmation requiring only a simple majority. Merkley has already said he will oppose that path and require a supermajority.

White House spokesman Sean Spicer on Tuesday slammed Democrats for their stated opposition plans — accusing them of playing games for political purposes and sending a “sad message” about how they will treat Trump’s nominees.

“Before they have even heard who this individual is, you’ve got some of them saying, absolutely no,” Spicer said. “The default used to be, unless qualified, confirmed. And it is now going to, always no. And I think that’s a pretty sad message.”