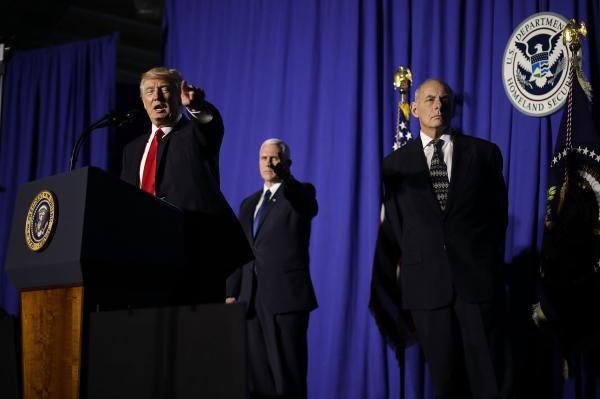 Separately, attorneys general in 15 states and the District of Columbia condemned the order as “unconstitutional, un-American and unlawful.”

“We look forward to meeting with you in short order so that we can have an open and candid discussion about how the Trump administration arrived at this chaotic place, what you understand the meaning of the executive order to be, and what guidance you have offered to your employees and other stakeholders,” the letter said.

The executive order led to detentions at airports nationwide, protests and judicial challenges over the weekend.

“Only two days after the order was signed, it is clear that it has already led to panic and disorder, not to mention protests,” the letter said.

In a statement Sunday, Kelly said “lawful permanent resident status will be a dispositive factor in our case-by-case determinations.” That means citizens of the seven countries who hold “green cards” — Iraq, Iran, Libya, Somalia, Sudan, Syria and Yemen — over the next 90 days will not be barred from re-entering the U.S., as officials had previously said. Also, Trump suspended all refugee admissions for 120 days.

Kelly said he doesn’t expect further airport detentions because they “are also working closely with airline partners to prevent travelers who would not be granted entry under the executive orders from boarding international flights to the U.S.”

The Department of Homeland Security, Kelly wrote, is working “with our partners in the Departments of Justice and State to implement President Trump’s executive order on protecting the nation from foreign terrorist entry into the United States.”

Senate Minority Leader Chuck Schumer, D-N.Y., appearing on the Today show on Monday morning, said he plans to call for a vote to overturn the executive order by late Monday on the Senate floor.

Sen. Diane Feinstein, D-Calif., posted on Twitter that she would introduce two bills Monday: “The first bill immediately rescinds the order. The second limits executive authority under the Immigration and Nationality Act.”

Also Sunday, Sen. Chris Murphy, D-Conn., announced via Twitter that he was planning a bill “this week” that would put a stop to what he called Trump’s “dangerous, hateful order.”

Murphy said on MSNBC on Monday the United States should make sure that those who manage to enter the country are unable to get dangerous weapons.

Although the Republicans have a 52-48 edge in the Senate, some GOP members also have criticized the executive order, including John McCain of Arizona and Lindsey Graham of South Carolina.

Legislators criticized the haste in the order. Also, senior officials at the State Department and Department of Homeland Security told NBC News they weren’t consulted on how to implement the order.

Trump, in Twitter posts Monday morning said “only 109 people out of 325,000 were detained and held for questioning.” He said the “big problems at airports were caused by Delta computer outage, protesters and the tears of Senator Schumer.”

Delta’s problems that led to a ground halt only occurred on Sunday night, with the majority of traveler detentions Friday and Saturday.

Trump also said the order was implemented hastily because “the ‘bad’ would rush into our country during that week. A lot of bad ‘dudes’ out there!”

The attorneys general, who said they represent more than 130 million Americans and foreign residents in their states, said in their statement, “We are confident that the executive order will ultimately be struck down by the courts. In the meantime, we are committed to working to ensure that as few people as possible suffer from the chaotic situation that it has created.”