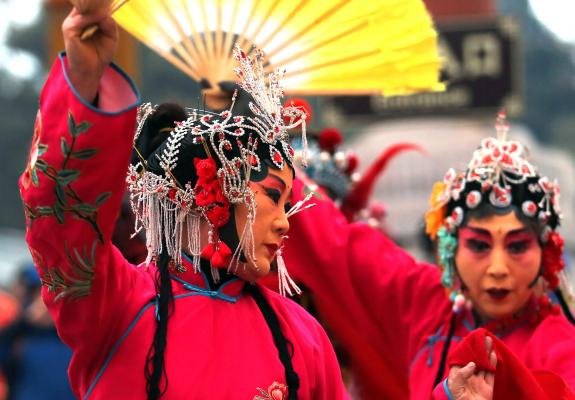 People in China and throughout the rest of the world participated in fireworks shows and parades to celebrate Chinese Lunar New Year.

In China residents of Zigong welcomed the Year of the Rooster by illuminating more than 130 large and medium-sized lanterns through out the city which attracted more than 200,000 visitors from throughout the country, according to CCTV.

Other national celebrations included people of China’s various provinces gathering at temple fairs for the celebration, also known as the Spring Festival, to observe and take part in traditional folk performances, such as dragon dances, Chinese shadow puppetry, and sugar painting.

Some families gathered together to share in local food and customs while singing, dancing and lighting fireworks.

Thousands of people began to travel home to celebrate the holiday every day with almost 9.2 million train trips scheduled across the country.

The celebrations typically begin the day before the lunar new year and and continue until the 15th day of the new year, which is Feb. 15, according to The Telegraph.

Each year is characterized by one of the 12 animals of the Chinese zodiac, with 2017 representing the rooster.

The signs of the zodiac are accompanied by certain personality traits. Those born in the Year of the Rooster are characterized as honest, energetic, intelligent, flexible and confident.