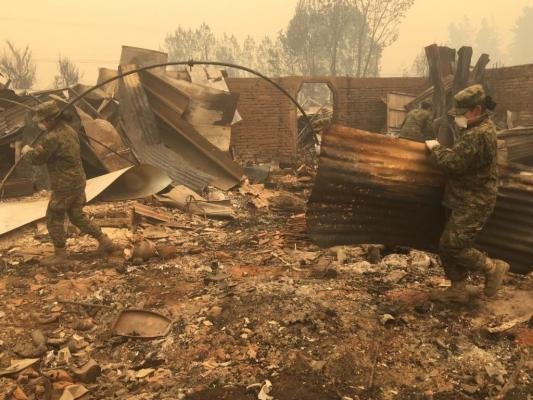 At least 11 people have been killed as massive wildfires have swept over central and Southwestern Chile, government officials said Saturday.

President Michelle Bachelet declared a state of emergency in what she called the worst wildfires in the country’s history, according to CNN.

“We have never seen anything on this scale, never in the history of Chile,” Bachelet said.

Many of the dead were firefighters who battled more than 100 separate and largely uncontrolled wildfires spreading throughout the country.

“The truth is that the forces are doing everything humanly possible and will continue until they can contain and control the fires,” Bachelet said.

Government reports said about half of the fires are uncontrolled and historically high temperatures have caused the flames to burn more than 593,000 acres of land.

More than 5,000 people were forced to evacuate, most from the town of Santa Olga, which was engulfed by the fire on Thursday, the Los Angeles Times reported.

At least 2,000 homes were destroyed by the fire leaving 8,000 people without a place to live.

The president called for national unity in the face of the disaster.

“We are facing a serious situation and can only succeed if we work together,” Bachelet said.

Bachelet made plans to meet with police, intelligence officials and the military to investigate how the fires began, saying the government has not ruled out the chance the wildfires were intentionally set.

“Because there are multiple points of origin, we cannot dismiss the possibility that there might be an intentional component here,” she said. “We are strongly following this and have been investigating it for some days, and I want to know how far we’ve gotten.”

The Chilean navy dispatched 550 marines to Concepcion and other areas affected by the fires and France, Russia, the United States and Peru offered assistance. Aid from Mexico and Colombia was expected to arrive later in the week.

About 200 prisoners escape from Brazilian jail after riots