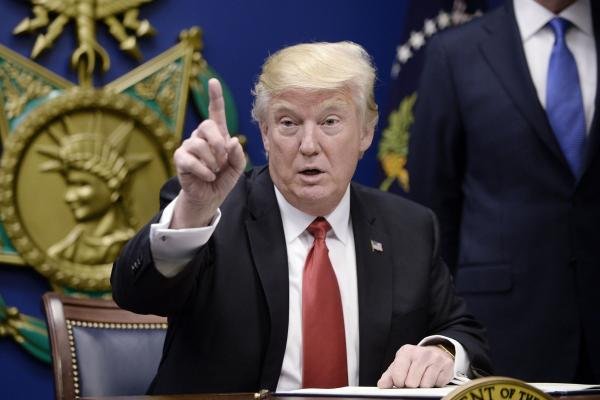 One executive action promises a rebuild of U.S. armed forces to strengthen the Pentagon’s global standing. It pledges to add more resources and equipment for the military, including aircraft and naval vessels.

“I’m signing an executive action to begin a great rebuilding of the armed services of the United States, developing a plan for new planes, new ships new resources, and new tools for our men and women in uniform, and I’m very proud to be doing that,” the president said.

“Our military strength will be questioned by no one,” he added. “But neither will our dedication to peace.”

During his campaign, Trump pledged to grow the country’s military might as part of an effort to defeat terrorism and protect the U.S. homeland with a strategy of “peace through strength.”

Trump’s defense secretary, James Mattis, who was sworn in Thursday, is expected to play a key role in implementing and maintaining the president’s hawkish national security agenda.

The order also gives Mattis autonomy in carrying out his vision, meaning the former U.S. Marine Corps general can override Trump in dictating defense policy — a provision the president reiterated Friday during a joint press briefing with British Prime Minister Theresa May.

The order also asks for a joint review by the Defense Department and the Office of Management and Budget for a “military readiness emergency budget amendment,” which would increase military spending this year and allow Mattis power to alter the Pentagon’s 2018 budget proposal within three months.

The other executive action Trump signed Friday orders the government to thoroughly vet refugees who apply for U.S. travel visas.

During his campaign, Trump sparked controversy when he announced that he favored a ban on foreign Muslims entering the United States. He later clarified that concept by saying it would focus on refugees from nations with a suspect track record on terrorism.

In-line with the controversial ban idea, the order’s primary purpose is to close U.S. borders to jihadists who are looking to strike domestically.

“I’m establishing new vetting measures to keep radical Islamic terrorists out of the United States of America,” Trump said. “We don’t want them here. … We only want to admit those into our country who support our country and love deeply our people.”

The order seeks a temporary suspension of visas for migrants from terror-sponsoring countries and other areas of concern — such as Iran, Syria, Libya and Iraq. Under the order, applications will be suspended for four months so the government can reassess and establish visa guidelines.

Both orders were signed by the president during a visit to the Pentagon Friday.

Trump to order feds to start border wall with Mexico