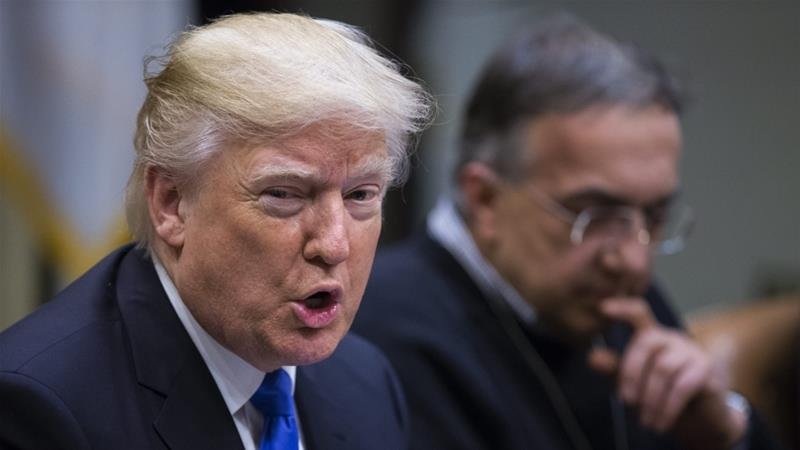 The US president, Donald Trump, will sign executive orders restricting visas and immigration, as well as the entry of refugees, making good on his signature campaign pledges, according to several media reports.

Trump is due to speak on Wednesday to employees at the Department of Homeland Security – which handles immigration – and sign orders on refugees and national security, the reports said.

“Big day planned on NATIONAL SECURITY tomorrow. Among many other things, we will build the wall!” Trump tweeted late on Tuesday.

One of the orders would restrict immigration and access to the US for refugees and visa holders from Iraq, Iran, Libya, Somalia, Sudan, Syria and Yemen, according to the Washington Post, which noted that citizens from many of these countries already faced major obstacles in obtaining US visas.

Immigration experts told the newspaper that the orders would stop all admissions of refugees for 120 days, including those fleeing Syria’s civil war, and a 30-day halt to issuing immigrant and non-immigrant visas to people from some countries with Muslim majorities.

But there is likely to be an exception for those fleeing religious persecution if their religion is a minority in their country. That exception could cover Christians fleeing Muslim-majority nations, according to The Associated Press news agency.

In an interview with Al Jazeera, Nihad Awad, a Muslim American community leader, called the order a “blind policy” that “does not make and will not make America safer”.

“It will make America and our society more fearful and less welcoming. And that’s not the American way of being great as a nation,” said Awad, executive director of the Council on American Islamic Relations.

During the fiscal year 2016, the US government had admitted 10,000 Syrian refugees, the majority of whom were families and their children.

Total and complete shutdown of Muslims

Trump launched his presidential campaign with a promise to restrict the entry of refugees and build a wall along the southern US border with Mexico.

He also called for a “total and complete shutdown of Muslims” entering the US until authorities can better screen those who come into the country.

What remains unclear is how the orders would be implemented by John Kelly, homeland security secretary, who told his confirmation hearing that the border wall might not “be built anytime soon.”

On Thursday, Trump is also expected to sign executive orders on the so-called sanctuary cities, where local officials refuse to cooperate with federal immigration authorities on such things as handing over undocumented immigrants for deportation.

Trump has also vowed to scrap the Deferred Action for Childhood Arrivals programme, which his predecessor Barack Obama introduced in 2012.

The programme allows more than 750,000 undocumented immigrants who came to the country as young children to live and work in the US without fear of deportation.

But whether, and how, Trump addresses the programme remains unclear.

“Many options are being worked through on DACA,” the Post quoted a White House official as saying.

In addition to the border wall, Trump also wants to renegotiate the North American Free Trade Agreement (NAFTA) with Mexico and Canada, warning last week that he would abandon the pact unless the US gets “a fair deal”.

Mexican President Enrique Pena Nieto vowed on Monday that there would be “neither confrontation nor submission” in the negotiations, which will include trade, immigration and other issues.

Trump to order feds to start border wall with Mexico