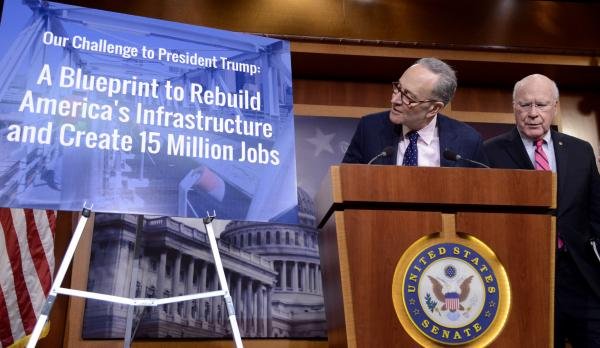 Senate Democrats say they will unveil a $1 trillion infrastructure plan Tuesday, preempting the Trump administration’s plans for a similar program.

The Democrats’ plan includes improvements to the United States’ broadband network, schools and Veterans Administration hospitals, as well as to roads, bridges and seaports over 10 years.

In part, the proposal comes as an attempted wedge between congressional Republicans and President Donald Trump, the Washington Post said Tuesday. While Trump promoted infrastructure improvement during his presidential campaign and in his inaugural address, GOP leaders in Congress have not endorsed any plan.

The Democratic plan, to be unveiled by Sen. Charles Schumer, D-N.Y., and other senior Democratic senators, dedicates $180 billion to rail and bus systems, $65 billion to ports, airports and waterways, $110 billion for water and sewer systems, $100 billion for energy infrastructure, and $20 billion for public and tribal lands, the New York Times reported Tuesday. Neither the Democratic Party nor Schumer’s office supplied details for the remaining $685 million in the proposed plan.

While Trump’s advisers have said the cost of an infrastructure plan would be borne by federal tax credits and public-private partnerships, the Democrats’ proposal, which they say will create 15 million jobs over 10 years, would rely solely on federal funding.