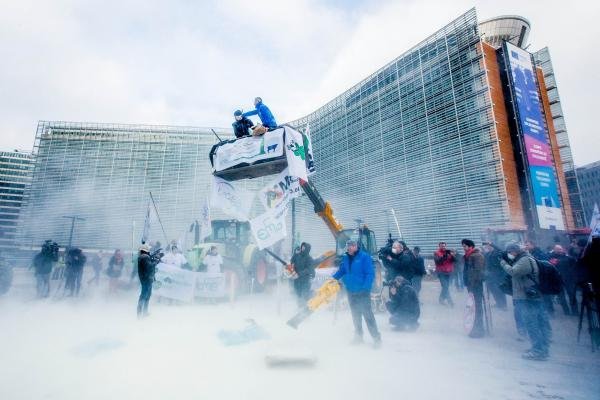 The protest occurred Monday during an EU Agriculture Ministers Council meeting held at the EU Council headquarters. The protesters argue the European Commission’s proposal last month to again sell large quantities of skimmed milk powder in order to stabilize the market will depress prices in Europe and abroad.

The EMB said the measures first enacted in September 2014 have prevented European dairy farmers from being able to sell their products at a price high enough to cover production costs. The EU bought more than 350,000 tons of powdered milk in attempts to sell with the goal of stabilizing prices.

“Stop the ongoing sales of intervention milk powder! Begin work on a legislative proposal to set up a permanent crisis instrument and present it to the parliament! There is no time to lose,” Erwin Schöpges, a member of the EMB executive committee and a Belgian dairy farmer, said in a statement on Monday. “Our farmers have been so rattled by the crisis that only a real price increase and long-term stability on the market can save milk production across the E.U. from extinction.”

Though the European Commission has attempted to sell tens of thousands of tons of powdered milk, most has not been sold because not many bidders have been willing to pay the Commission’s minimum price of about $2,300 a ton.

Armenian, Russian citizens to use internal passports for visits