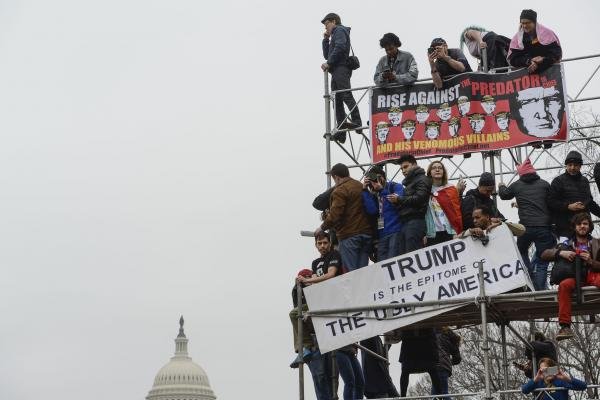 Protesters in Washington, D.C., and worldwide began gathering Saturday for the Women’s March on Washington and other demonstrations following the inauguration of President Donald Trump.

Thousands of people flooded Metro trains and other forms of public transportation as the march began in the nation’s capital.

Heavy traffic was also reported coming from Northern Virginia and Maryland into Washington D.C. and multiple parking garages began to fill up as people arrived from surrounding states for the march, according to the Washington Post.

The march, which began as a movement on Facebook, quickly spawned more than 600 “sister marches” in major U.S. cities outside of Washington D.C. and international marches in Sydney, Hong Kong, London, Rome and Paris, according to CNN. Some 2.2 million people were expected to participate worldwide.

“We’re not marching as an anti-Trump movement per se, we’re marching to protest the hate speech, the hateful rhetoric, the misogyny, the bigotry, the xenophobia and we want to present a united voice with women around the globe,” Australian organizer Mindy Freiband said.

More than 25,000 people are expected to gather in London from around the world carrying signs and donning pink “pussy hats” to advocate for rights for women, migrants and the LGBTQ community and protest the nationalist ideas touted by Trump during his campaign, according to the Guardian.

Nearly 200 protesters gathered outside of the U.S. embassy in Manila an burned a U.S. flag with Trump’s face and shouted “Dump Trump,” the Philippine Daily Enquirer reported.

“This protest is in solidarity with the American people, because their incoming president is a fascist and a racist who is against immigrants,” Renato Reyes Jr. of militant group Bagong Alyansang Makabayan said. “Trump will uphold the interests of the businessmen, not the people.”

Some world leaders offered praise and support for Trump as he was sworn into office, in hopes that he would remain a strong global leader despite nationalist statements.

Prime Minister of Japan Shinzo Abe congratulated Trump on his inauguration and said he hoped to meet with the new U.S. President at the “earliest possible occasion,” according to the Straits Times.

“I look forward to working hand in hand with you to ensure peace and prosperity in the Asia Pacific region, and to address various challenges the international community faces,” he said.

Others viewed the “America first” message of Trump’s inauguration speech as a hostile sign of things to come.

“Hostile inauguration speech. We can’t sit around and hope for U.S. support and cooperation,” Belgian Prime Minister Guy Verhofstadt wrote on Twitter. “Europe must take its destiny and security in its own hands.”

German Vice Chancellor Sigmar Gabriel warned that Trump’s highly nationalistic tones resembled “the political rhetoric of the conservatives and reactionaries of the 1920s,” according to Deutsche Welle.

“He’s really serious about it, and I think we should prepare ourselves,” he said.

Related Topics:Donald TrumpU.SWomen's March on Washington
Up Next