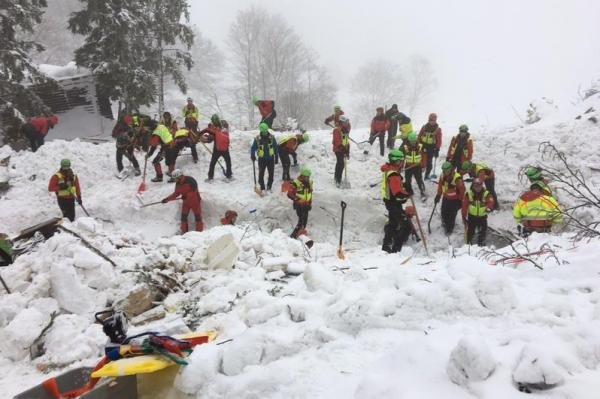 Rescue workers continued to pull survivors from the wreckage of an Italian hotel more than three days after it was buried in a massive avalanche.

Rescue efforts continued Saturday to try to reach hotel guests and employees who could be trapped inside the rubble of the hotel, which was buried in an avalanche triggered by an earthquake. The total number of those rescued has hit 11, after a dramatic scene unfolded Friday, when four children were located and pulled to safety. Two more people were rescued Saturday.

Workers have painstakingly combed through the wreckage, mindful that shifts in the snow or the buried remains of the luxury Hotel Rigopiano in Penne, Italy, could cause air pockets to collapse.

Thus far, five bodies have been recovered. Local authorities on Saturday said they now believe a total of 23 people remain missing. Previous estimates had put the number at between 11 and 20. A review of guest registries, interviews with survivors and hotel staff have helped authorities develop a better idea of how many people were at the hotel when the avalanche struck.

Italian officials said they have opened a manslaughter investigation, questioning whether the hotel should have been evacuated due to the heavy snowfall in the area, increasing the possibility of an avalanche, even before the earthquakes hit. The avalanche did not occur until hours after the last of the four earthquakes hit.

One surviving hotel guest said everyone had checked out of the hotel but they were stuck there, waiting for the road leading away from the resort to be plowed so they could leave.