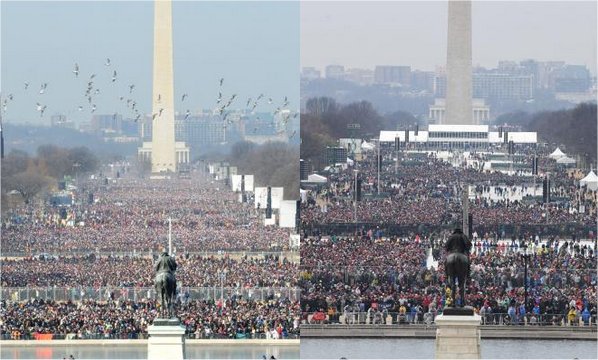 The official Twitter account of the National Park Service was restored after briefly shutting down when a staff member retweeted images implying there was a low turnout on the National Mall for President Donald Trump’s inauguration.

The images, which were widely shared by Trump critics on social media, showed the mall teeming with an estimated 1.8 million people for Barack Obama’s first inauguration in 2009 next to a decidedly less-than-full crowd in the same space Friday. The park service did not offer an estimate for the number of people who attended Trump’s inauguration.

“All bureaus and the department have been directed by incoming administration to shut down Twitter platforms immediately until further notice,” the Interior Department wrote in an email to staff on Friday.

As of Saturday morning, the National Park Service Twitter account was up and running. The inauguration tweets were deleted and the department apologized for the incident.

“We regret the mistaken RTs from our account yesterday and look forward to continuing to share the beauty and history of our national parks with you,” the agency tweeted Saturday morning.