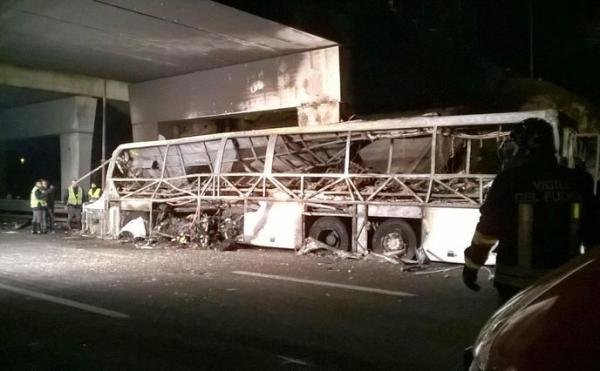 At least 16 people, most Hungarian teens, were killed Saturday when their bus hit a bridge pillar and burst into flames in northern Italy.

Another 39 people were taken to local hospitals after the crash near Verona, Italy. At least 12 are in serious condition. Officials said the bus was carrying students from Szinyei Merse Pal Gimnazium high school in Budapest, Hungary, who were returning from a ski trip in France.

Hungary Prime Minister Viktor Orban declared Monday a national day of mourning. Officials have not determined the cause of the crash.

“The particularly hard part of their job will begin on Sunday: the identification of the bodies and the issuance of the death certificates,” the Hungarian government said.

Italian authorities said the bus crashed into the pillar and burst into flames. Some of those on board were thrown from the vehicle. The bus was carrying two drivers and 54 passengers.

An airplane and four ambulances from Hungary’s National Ambulance Service departed Budapest for Verona to return the injured.

Russian President Vladimir Putin expressed his condolences and sympathy to the victims and their families.

“It is tragic that the crash claimed lives of children and teenagers,” he said.