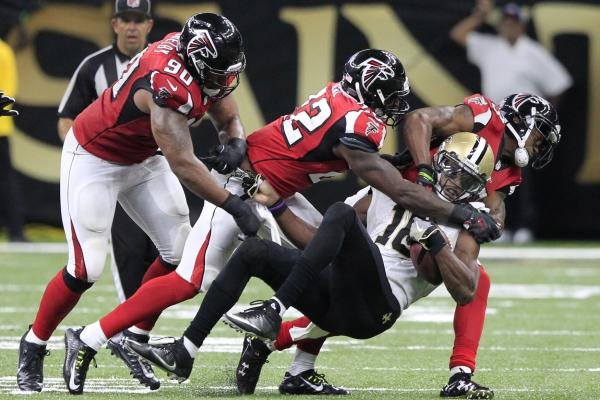 As in Dan Quinn, who is 19-13 in two seasons as head coach and is only two years removed from going to the Super Bowl as Seattle Seahawks defensive coordinator, helped Seattle win the NFC title over the Green Bay Packers and Aaron Rodgers two years ago in one of the wildest finishes in playoff history.

In Atlanta, Quinn brought that championship culture and helped define the type of player the Falcons needed to reach a stage of this magnitude. His own philosophy was shaped by Bill Parcells — Pioli’s father-in-law and a guiding force for Patriots coach Bill Belichick, who along with Pioli helped develop Dimitroff’s football eye — and Joe Gibbs.

The evolution of the philosophy and the rapid adaptation to Quinn’s ideals from ownership down to the last man on the practice squad is on display all across the 2016 Falcons.

“Thomas and Scott, they call it DQ guys,” Quinn said. “They know what I mean by that, the toughness and the effort. Traits that a player does have and how we feature that on the team. Having that connection, starts with Thomas and I from coaching and scouting to the assistant coaches, we’re all taking the same language and looking for the same thing. Internally we definitely feel it.”

Quinn said the Falcons are a “better version of ourselves” than the 33-32 win over Green Bay during Week 8 of the regular season.

“We’re getting closer to where we’d like to be in all three phases,” Quinn said.

Atlanta leads the NFL in scoring and is second in yards per game — 415.8 — led by potential MVP Matt Ryan and stud receiver Julio Jones. Jones did not practice Wednesday but Quinn said the rest was by design and that the team’s No. 1 target would get more work as the week goes on.

While there was no overhaul of the offense, the Falcons stress the rise of the running game since the first meeting, and Quinn said a big piece of that puzzle is top free agent addition Alex Mack at center.

“Every play, he’s at the front of it,” Quinn said. “He’s big like a guard but has the quickness of a center. He has a really high football IQ that enables him to sort things out.”

Atlanta had six players selected to the Pro Bowl, including Ryan, Mack and Jones, as well as running back Devonta Freeman. But Atlanta is hoping to be unavailable for this year’s version of the NFL All-Star game and instead be making plans for the second Super Bowl (XXXIII) in franchise history.

The Falcons are 6-3 at home this season and will close the Georgia Dome as a football venue for good regardless of Sunday’s result.

“It’s a great time for our city and our fans,” Quinn said. “Man are we excited for this opportunity.”