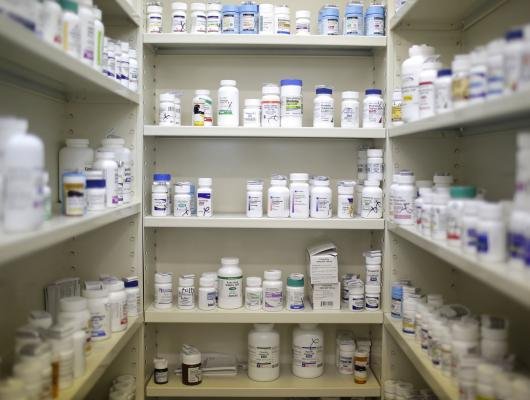 A prescription drug wholesale company was handed a record fine Tuesday on allegations from U.S. regulators for not reporting suspicious orders of painkillers.

McKesson Corporation will pay a $150 million fine and stop selling certain drugs in Colorado, Ohio, Florida and Michigan after it avoided its own internal systems to avoid inconsistent or outsize orders of drugs such as oxycodone and hydrocodone that are linked to the national opioid epidemic, the Department of Justice announced on Tuesday.

In addition to the fine, the company agreed to put in place new staffing and organizational methods, periodic auditing, additional potential fines for noncompliance and will meet with an independent monitor to assess compliance with the terms of the company’s settlement with the Department of Justice.

The fine is not the first for McKesson, which was previously fined $13.5 million in 2008 for the same problem and was expected to correct the issues allowing outsize, suspicious orders of the drugs to be shipped to customers but did not do so.

“The government’s investigation developed evidence that even after designing a compliance program after the 2008 settlement, McKesson did not fully implement or adhere to its own program,” the department said in a press release.

The Department of Justice alleges that after its failure to follow the terms of the 2008 settlement, McKesson processed millions of orders nationwide, including supplying pharmacies in the four states with increasing amounts of oxycodone and hydrocodone pills. In one case, McKesson reported just 16 of 1.6 million orders as suspicious, all of which were related to a single customer.

“When drug distributors like McKesson fail to alert the DEA of suspicious orders of prescription drugs by pharmacies, the end result can be fatal,” Acting U.S. Attorney Bob Troyer said in a statement to The Denver Post.

McKesson did not own up to doing anything wrong, saying in a press release that the settlement puts to rest disputes between the company and the Department of Justice and Drug Enforcement Agency over its interpretation of regulations for suspicious controlled substance orders.

The company said, however, that under terms of the settlement it plans to improve its controlled substance monitoring program, which has been implemented over the course of several years and will now be used to monitor suspicious orders, along with the requirements of the settlement.

“Pharmaceutical distributors play an important role in identifying and combating prescription drug diversion and abuse,” said John Hammergren, chairman and chief executive officer at McKesson. “We are committed to tackling this multi-faceted problem in collaboration with all parties in the supply chain that share the responsibility for the distribution of opioid medications.”