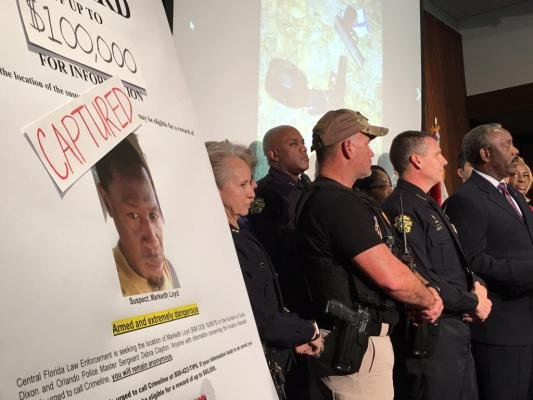 Authorities said Tuesday they have caught the man they believe killed his girlfriend last month and an Orlando police officer this month, after a manhunt that lasted for more than a week.

Markeith Loyd was arrested Tuesday afternoon in connection with the shooting death of Lt. Debra Clayton on Jan. 9., and was restrained with her handcuffs, police said.

He was found and arrested at an abandoned house, officials said, and ultimately surrendered without incident.

“We’ve got him! Markeith Loyd in OPD Custody,” The Orlando Police Department tweeted after the arrest.

Clayton was attempting to arrest Loyd — who was wanted for the fatal shooting of his pregnant ex-girlfriend, 24-year-old Sade Dixon, last month and injury of her brother — when she was shot while approaching him in front of a Walmart.

Loyd faces two counts of first-degree murder and two counts of aggravated assault with a firearm in the deaths of Dixon and her unborn child. Charges in Clayton’s shooting have not yet been announced.

Earlier Tuesday, the U.S. Marshals Service put Loyd on its ‘most wanted’ list and added another $25,000 to the reward — bringing the total to $125,000. The Marshals, Orlando police, FBI, Orange County Sheriff’s Office and Florida Department of Law Enforcement all aided in Loyd’s capture.

Police said at a press conference Tuesday that Loyd was wearing body armor and carrying two firearms, including one with a high capacity magazine — and they showed off Clayton’s cuffs they used to apprehend him.

“To put her handcuffs on the bad guy … is meaningful to her family and to her law enforcement family,” Mina said.