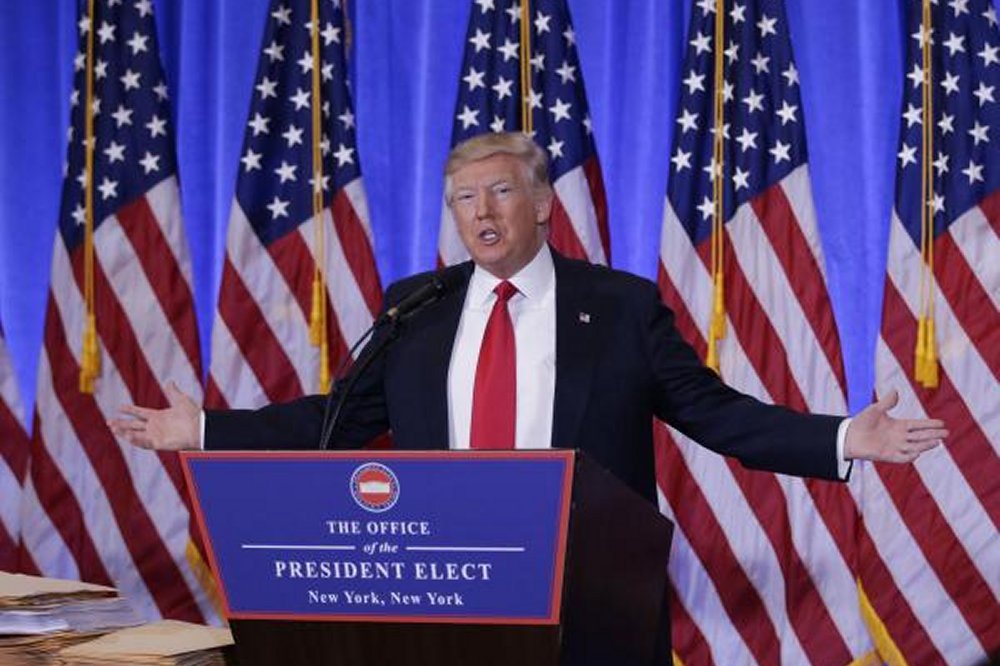 In his first news conference since being elected president, Donald Trump announced Wednesday he plans to turn over all his business operations to a trust controlled by his two adult sons and a longtime associate.

The president-elect, along with help from his lawyer, Sheri Dillon, laid out the changes to his vast business operations in a wide-ranging press conference that included Russian hacking, Cabinet appointments and healthcare reform. It was his first news conference since July 27, a 167-day stretch.

Speaking from the Trump Tower lobby, Dillon announced how a “wall” will be placed between Trump and the Trump Organization when he becomes president on Jan. 20.

She called it a “President-elect trust” but noted “you can’t totally have a totally blind trust with businesses. President Trump can’t unknow he owns Trump Tower.”

Trump will not be involved with his business, including receiving financial details. All of his investments in publicly traded or easily liquidated investments have been disposed.

Dillon said Trump will only know about a deal if “he reads it in the paper or sees it on TV,” and it must be vetted with an ethics adviser in the firm for possible conflicts of interest.

They announced he will donate to the United States government all profits from foreign government payments to his hotels. And the Trump Organization will also refrain from entering into any new deals with foreign partners, which will mean an immediate financial loss “of millions of dollars” for the family, Dillon said.

He said his sons, Donald Jr. and Eric Trump, will be involved “in a professional manner,” along with his long-time executive, Alan Weisselberg.

Additionally, his daughter, Ivanka Trump, will have no role with the company as her family prepares to move to Washington. Earlier in the week, Trump named Ivanka’s husband, Jared Kushner, as senior adviser to the president.

Next to the lectern were stacks of papers detailing the terms of the trust.

During Wednesday’s press conference, Trump also took the opportunity to say he believes Russia is behind hacking into Democratic organizations during the 2016 election.

“I think it was Russia,” he said of hacking into the emails of members of the Democratic National Committee.

His admission came less than a week after U.S. intelligence officials briefed him and President Barack Obama on the issue.

During that briefing, Trump and Obama also learned about unverified reports from a former British MI6 agent who said Russia had compromising information about Trump that it planned to use to blackmail him.

Trump blasted organizations that published the specific allegations, calling it “nonsense.” He refused to answer a question from CNN reporter Jim Acosta, labeling the organization as “fake news,” and said BuzzFeed was a “failing pile of garbage.”

CNN did not publish the specific, unverified details, though BuzzFeed did.

Dmitry Peskov, spokesman for Russian President Vladimir Putin, called the report “pulp fiction” and said the Kremlin does not have information on Trump.

He said “we are doing a tremendous service” to the Democrats by quickly replacing Obamacare because it would “easily implode” this year. Without giving details, he said coverage will be “far less expensive and far better” than the current plan.

Trump said he was pleased with how the Senate confirmation hearings were going with his Cabinet selections.

Also Wednesday, Trump named Dr. David Shulkin, the current Under Secretary of Health for the U.S. Department of Veterans Affairs, to the the veterans affairs Cabinet post.

And he said he plans to announce a nominee to fill the opening on the Supreme Court within two weeks.