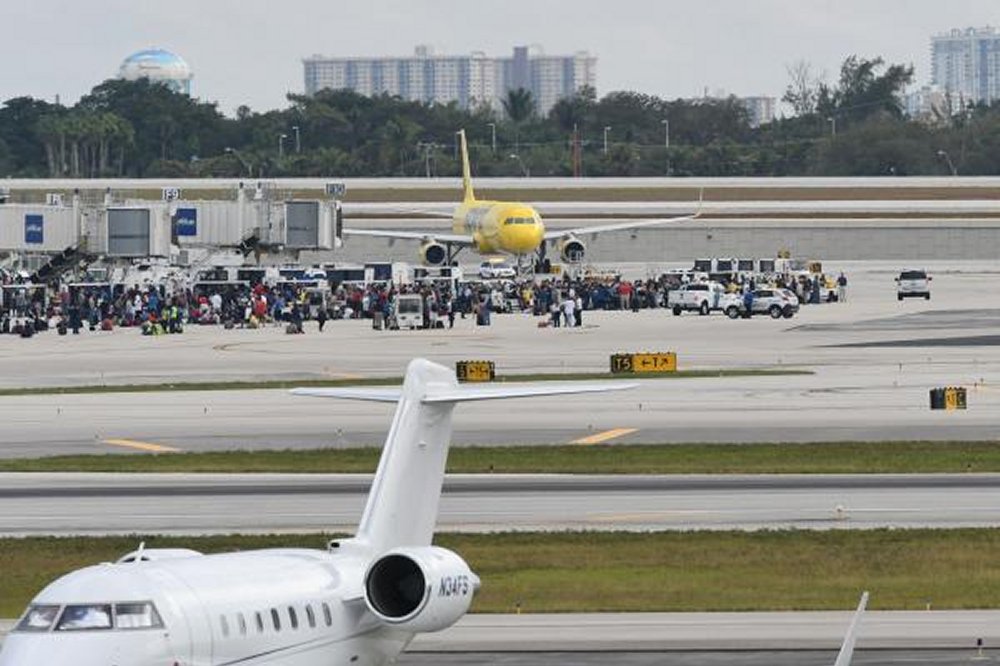 Federal prosecutors have charged the suspect in Friday’s deadly rampage at the Fort Lauderdale airport with crimes that could carry the death penalty.

Esteban Santiago, 26, was charged Saturday with performing an act of violence against a person at an airport serving international civil aviation and two other counts, the U.S. Attorney’s Office for the Southern District of Florida said.

In court documents filed along with the charges, prosecutors said Santiago told FBI agents interviewing him after his arrest he flew from his home in Anchorage, Alaska, to Fort Lauderdale with the express purpose of carrying out the shootings that killed five and wounded six more.

Santiago said he checked his 9-mm handgun, which he purchased legally, before departure, then picked it up upon arriving in South Florida. Santiago told agents he brought the gun into a bathroom where he loaded it, and stuck it in his waistband before using it to open fire on people inside Terminal 2 at Fort Lauderdale-Hollywood International Airport on Friday afternoon.

Santiago, a Puerto Rico National Guard veteran who served a tour in Iraq, had received psychiatric treatment in Anchorage prior to the incident. In November, he turned up at the Anchorage FBI field office, saying agents of the Islamic State had invaded his brain and were forcing him to watch terrorist recruitment videos. The FBI said agents brought Santiago to a local hospital where he checked in voluntarily for a mental health evaluation. Agents said they found no evidence at the time Santiago had actually conspired on behalf of the terror group.

Santiago’s aunt told CNN he returned from military duty in Iraq “troubled” and had become distant, failing to answer phone calls or return text messages while living in Alaska.

Still, authorities said they have not assigned a motive to the killings.

“We have not identified any triggers that would have caused this attack,” Piro said in a press conference on Saturday morning, adding that authorities “continue to look at the terrorism angle.”

“We have not ruled out anything,” he said. “We continue to look at all avenues, all motives.”

Authorities said Santiago shot off 10 to 15 rounds, reloading his handgun once during the attack. When he ran out of bullets he dropped the gun and laid on the ground waiting for police to take him into custody, witnesses said.

Santiago is being held at a Broward County jail and is scheduled to appear in federal court in South Florida on Monday.

The charges against Santiago could carry the death penalty, should prosecutors choose to pursue it. They could also result in life in prison without parole.

Also Saturday, the airport reopened to aircrafts after being closed to passenger travel for at least 14 hours. Terminal 2, where the shooting took place remained closed, but passengers were able to travel through terminals 1, 3 and 4, the Sun Sentinel reported.

Passengers were informed that some flights may still be canceled. Passengers are encouraged to check with their individual airlines.

A volunteer firefighter from Virginia and a Georgia retiree were identified as victims killed during the shooting.

Terry Andres, a 62-year-old firefighter from Virginia Beach, Va., was killed while preparing to go on vacation with his wife who was unharmed during the shooting, WAVY reported.

Olga Woltering of Marietta, Ga. was also killed during the shooting, members of her church told the Atlanta Journal Constitution.

The Georgia retiree was preparing to go on a cruise with her husband, Ralph Woltering, who was not injured during the shooting.

The airport also said it was processing more than 20,000 pieces of luggage and other personal items that were left behind in the airport evacuation.

Officials assured passengers that each of the 20,000 items will be returned to its righful owner, the airport tweeted.

Kerry apologizes to gay community for decades of prejudice by State Dept.