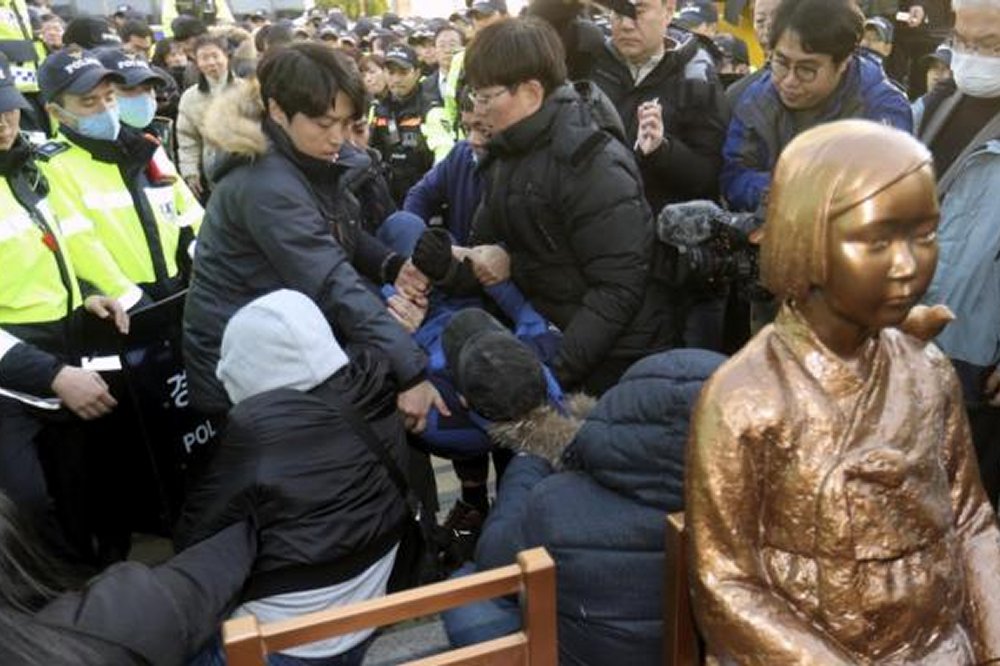 Japan recalled two top diplomats from South Korea because leaders in the country have allowed a statue representing “comfort women” to be constructed in front of its consulate.

The Japanese ambassador to South Korea and the consulate general of Japan in Busan, South Korea, were temporarily recalled from their posts, and Japan has paused negotiations on a currency swap and other economic issues, in response to the statue’s continued presence.

The five-foot-tall statue is of a South Korean girl, seated, and meant to represent the thousands of women from that country, and others in Asia, who were forced into being sex slaves for Japanese soldiers during World War 2.

“We have repeatedly asked South Korea to handle the resolution of this issue appropriately, but the situation has not improved, so we have taken this action,” said Yoshihide Suga, chief cabinet secretary in Japan.

During World War 2, an estimated 200,000 women were forced to be sex slaves serving Japanese soldiers. Many of the women were from South Korea, but also came from China, the Philippines, Indonesia and Taiwan.

The two countries reached an agreement in 2015 that was intended by both sides to resolve the issue, which included Japan giving South Korea $8.6 million to help survivors. While the deal was seen as resolving the issue by leaders, advocacy groups for the surviving women said it was not nearly enough to make up for the abuses committed against the enslaved women.

There are more than 37 statues around South Korea in tribute to “comfort women,” with the most famous put up in front of the Japanese embassy in Seoul in 2011. The newest was erected in Busan to mark the passing of a year since the maligned settlement in 2015.

In a statement, South Korean officials expressed regret at Japanese feelings about the statue, however noted that disrupting economic talks and pulling diplomats will not help resolve the issue.

“We express our strong regret over the action taken by Japan with regard to the statue,” the South Korean foreign ministry said in a statement. “The government wants to make it clear again that both countries should keep advancing their bilateral ties based on trust regardless of any challenging issues.”

Chinese state media on Trump’s Twitter use: ‘Diplomacy not a child’s game’