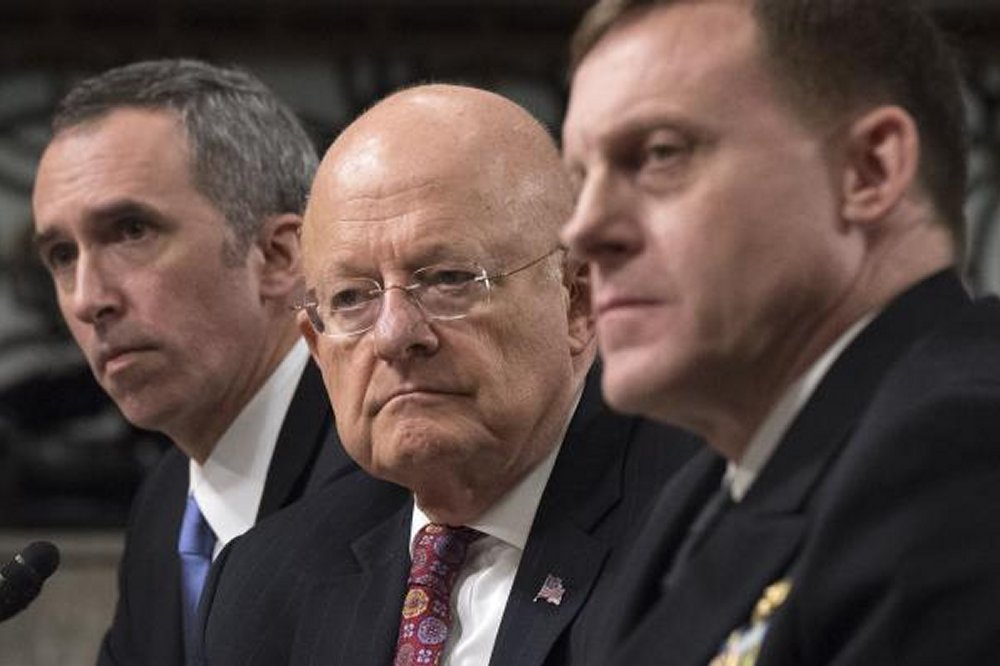 Three of the top U.S. intelligence officials testified before a Senate panel Thursday, defending their conclusions that the Russian government was involved in election-related hackings last year.

Director of National Intelligence James Clapper, U.S. Cyber Command Commander and National Security Agency Director Adm. Michael Rogers and Under Secretary of Defense for Intelligence Marcel Lettre II, told the Senate Armed Services Committee that their agencies’ investigations found that Moscow was responsible for carrying out a cyberattack on the Democratic National Committee, as well as a smaller attack on its Republican counterpart.

In his testimony, Clapper defended the assessment that Russia attempted to sway the election in Donald Trump’s favor — a conclusion reached by the CIA and seconded by the FBI and other agencies.

Trump, though, has taken a position of extreme skepticism regarding the intelligence community’s claims and the government’s responding actions, calling them “ridiculous” — despite his own statement in September that Russia could be involved. Thursday, he tweeted that he is a “big fan” of the U.S. intelligence community.

While posing questions to Clapper, Sen. Claire McCaskill, D-Mo., suggested that recent criticisms of U.S. intelligence by Trump offer no benefit — and instead only facilitate potential national security risks.

“Who actually is the benefactor of someone who’s about to become commander in-chief trashing the intelligence community? McCaskill queried.

“I think there is an important distinction here between healthy skepticism — which policymakers, to include policymaker No. 1, should always have for intelligence — and disparagement,” Clapper answered, referring to Trump’s remarks.

McCaskill then answered her own question by stating the ones who benefit from such criticism are suspected perpetrators like Russia, North Korea, Iran, China and the Islamic State terror group.

“We stand, actually more resolutely on the strength of that [conclusion],” Clapper said.

“Every American should be alarmed by Russia’s attacks on our nation,” he said at Thursday’s hearing. “There’s no escaping the fact that this committee meets today in the aftermath of an unprecedented attack on our democracy.”

Sen. Richard Blumenthal, D-Conn., called Trump’s remarks “a terrible disservice to our nation and to the very brave men and women who put their lives on the line so we may be informed.”

The fallout from the Russian investigation could create a rift between Trump’s administration and the intelligence community. Trump’s team has already said it’s planning to slim and refocus the nation’s 17 intelligence agencies, believing they have become too politicized.

The Russian government had made it known it was far more supportive of a Trump presidency than one involving Hillary Clinton. Putin and Trump have at least some relationship from past business dealings.

President Barack Obama is still expected to receive a report from intelligence agencies about the Russian hacking claims, and Trump is scheduled to be briefed on the matter Friday.

Clapper, Rogers and Lettre did not reveal details of the hackings but promised the panel that Congress will receive a full report on the matter next week, at which time an unclassified version will also be made public.

Rogers said he worried about the impact of Trump’s remarks on members of the intelligence community.

“I don’t want to lose good, motivated people who want to serve this nation,” he said. “I just don’t want a situation where our ‘workforce starts to walk.'”

Another hearing Thursday, in the Senate Foreign Relations Committee, was a closed meeting.