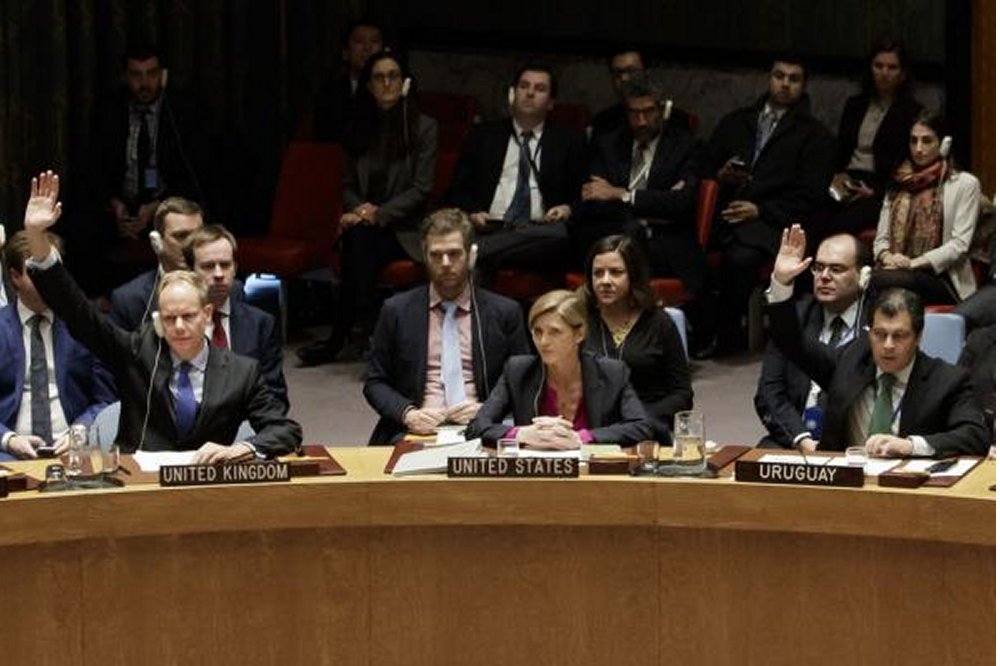 The world’s chief diplomatic security apparatus on Friday passed the first Middle East peace resolution in nearly a decade — with the United States conspicuously absent in the effort.

The United States abstained from voting.

The resolution outlines a number of opinions on the conflict and expresses a “grave concern” that continued Israeli settlement is standing firmly in the way of any potential two-state peace agreement — a view cited by U.S. Ambassador Samantha Power on Friday as the primary reason the United States refused to vote.

“The Security Council reaffirmed its established consensus that settlements have no legal validity,” Power said. “The United States has been sending a message that settlements must stop privately and publicly for nearly five decades.”

The resolution calls for Israel to stop all construction and dismantle every settlement built in the area since 2001 — saying they are a “flagrant violation” of international law.

The resolution’s passage, the first involving Middle East conflict since 2008, was followed by a round of applause in the Security Council chamber.

The domestic settlements have posed a substantial hurdle to finding lasting peace in the decadeslong Israeli-Palestinian conflict. The Israeli government has built the homes on disputed West Bank territory, and Palestinians have called for Tel Aviv to stop.

The United States could have vetoed the measure, as it has done in the past, but President Barack Obama refrained — even in the face of severe pressure from the Israeli government and President-elect Donald Trump.

Though significant, the United States’ declining to vote isn’t a total surprise. Obama has long been critical of Israel’s settlement-building efforts.

Israeli Prime Minister Benjamin Netanyahu said Friday that he rejects the “shameful” U.N. resolution and will do nothing to adhere to it. Palestinian leader Mahmoud Abbas hailed the vote as a victory and said it is a major blow to Israeli policy.

Israelis and Palestinians have been fighting over the disputed land since it was carved up following the Six-Day War in 1967.

“The United States acted with one primary objective in mind: to preserve the possibility of the two state solution,” he said in a statement Friday.

“Two states is the only way to ensure Israel’s future as a Jewish and democratic state,” he continued. “That future is now in jeopardy, with terrorism, violence and incitement continuing. … That is why we cannot in good conscience stand in the way of a resolution that makes clear that both sides must act now to preserve the possibility of peace.”

Staunch U.S. supporters of Israel slammed the Obama administration for refusing to block the resolution.

“The Obama-Kerry foreign policy has gone from naive and foolish to flat-out reckless,” Sen. Lindsey Graham, R-S.C., said in a statement. “With friends like these, Israel doesn’t need enemies.”

The resolution, initiated by Egypt, has no actual authority to stop Israel’s construction in Gaza, but it is a significant international political statement.

Trump intervened in the matter Thursday — even calling Netanyahu and Egyptian President Abdel Fattah el-Sisi — to keep it from reaching a vote. Egypt agreed to delay the vote, but Malaysia, New Zealand, Senegal and Venezuela appropriated the resolution and reset it for a vote Friday.

After the vote, Trump hinted that he’s not planning to accept the resolution sitting down.

“As to the U.N., things will be different after Jan. 20th,” Trump tweeted.